From the mid-nineteenth century on-wards railways reached Stratford from all directions. From the south in 1859 came The
Oxford, Worcester and Wolverhampton Railway, from the north in 1860
came the Stratford Railway and from the east in 1873, came the East
and West Junction, (E&W) laterly pushing on from Stratford west
to Broom on the Evesham & Reditch line. The E&W was to
become part of the Stratford Upon Avon & Midland Junction
Railway company (SMJ) by 1909. 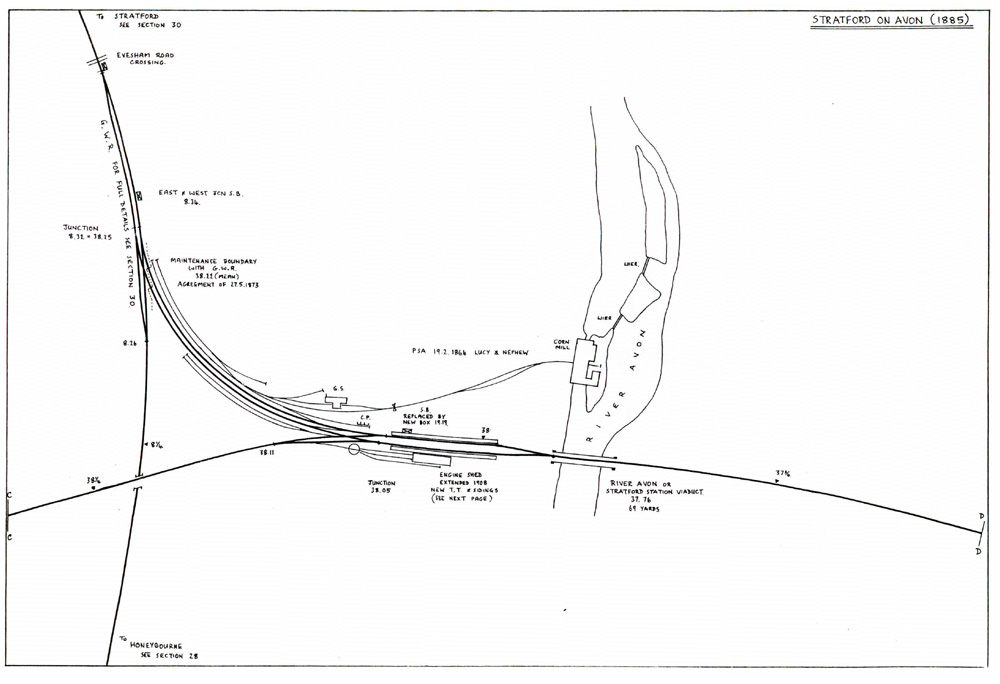 
The first section of the E&W to open was the Fenny Compton to Kineton section on 1st June 1871 followed by the Kineton to
Stratford upon Avon section on 1st July 1873 The E&W was to
eventually provide a link between Greens Norton Junction near
Towcester although the E&W was so under-used that the meager
two trains a day each way were temporarily suspended in 1877 when
E&W passenger services were suspended altogether. 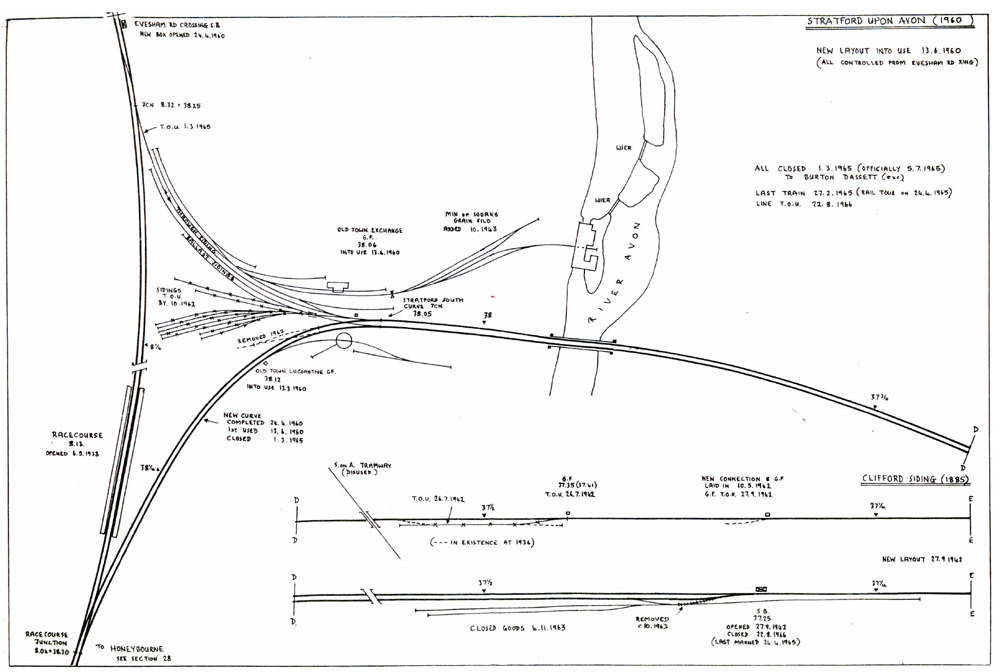 
At Stratford, even the GWR, a company never one to miss out on a bid to remove a local competitor ignored the E&W, its thought
because of its parlous financial state. They were to offer exchange
sidings facilities with their Birmingham to Gloucester line at
Stratford despite the E&W offering a rivalry to the GWR's
Stratford upon Avon station a short distance away.


The SMJ's main (and really only shed - save for the short-lived Towcester and Blisworth sheds) was housed at Stratford. 21D,with
its turntable was a sub-shed of 21A. Saltley in Birmingham and was
where the SMJ's locos were serviced, coaled and turned if needed,
even the locos from the Edgehill Light Railway saw time at 21D.
Sited opposite the SMJ station, the down platform being right along
side the shed; with its familiar vented roofs it features as an
unintended addition to many existing Stratford station photos.
Adding to the station sites large size; it was, like the station
itself all gone by the mid 60's. Ever keen to steal a march on the
competitors, namely the G.W.R, the L.M.S. thought to tap into
Stratford-Upon-Avon’s tourist potential. The line was pushed as
'The Shakespeare route', they bought a large country house from the
Trevelyan family near Stratford naming it the ‘Welcome Hotel’. They
introduced specials from Blisworth, running evening specials to
connect at Blisworth and so onto London. In 1932 the LMS offered a
unique service when they introduced the short-lived ‘Ro-Railer’, a
half bus, half train experiment

The station, the line infact the company did well to keep going until its closure to passengers in 1952. Ironically, the Stratford
end of the SMJ faired best under the resurgence of goods traffic, a
new curve being intalled in the 60's to further improve through
running. The SMJ's presence at Stratford had to end. By the time
the Queen Mothers train arrived at the former SMJ station in 1964
for a visit - for which the platform was specially resurfaced
causing some consternation amongst railway workers and locals
alike, it had been 12 years since the station has seen a scheduled
passenger service.

Today it has all gone, well not all. Seven Meadows Way sits on the trackbed of the former SMJ and the bridge across the Avon uses
the footings of the old railway viaduct. Along Seven Meadows Way,
named after the old name for that part of Stratford-Upon-Avon can
be found the stations original platform edges, and by way as a
tribute to the locations important past a short sub of track with
buffers has been erected.


I doubt if these were originally from the site - but its a nice touch!