Started by Jack Freuville on Sunday.

Dick... I guess for some people its all relative!!!!

Further history on 0-6-0 La Savoie. In 1841 Joseph Locke, engineer of the Paris & Rouen Railway, asked Brassey & Mackenzie contractors, in conjunction with William Allcard, contractor for the Permanent Way on the Grand Junction Railway and William Buddicom, engineer, to jointly supply the plant at the Chartreux Works. Hence the company of Allcard & Buddicom was formed specifically to supply locomotives, carriages & wagons to the Compagnie de Chemins de Fer de Rouen. This contract was for 40 locos, 120 2nd class carriages & 200 wagons. The first locos were built in October 1842, to an "Allen Crewe" design manufactured under license. In 1845 the company moved to better premises in Sotteville near Rouen. The 2 French tender engines 2-4-0 and 0-6-0 were purchased from Le Chemin de Fer de Rhone et Loire in 1858 by Thomas Brassey for a contract in Savoy, namely the Mont Ceris Tunnel Railway, which opened in October 1871. Savoy is part of the Auvergne-Rhone-Alps region following its annexation to France in June 1860. The test train took a party of 54 including Buddicom, Crampton & Brassey as Director. Both French engines were probably hired to the E & WJR in 1874 from Thomas Brassey.

Thomas Crampton, an English engineer, was the contractor who built the line for the E & WJR and was later a director of that company.

William Buddicom, an English engineer, who built some of the first locomotives in France.

Thomas Brassey, an English civil engineering contractor, had by 1870 built 75% of French Railways, 33% of British Railways, and 1 in 20 miles of railways in the world.

Two questions come to mind. When was La Savoie actually named and where was she built? We know La Savioe was built in one of two places, but was she named in honour of Savoy being annexed to France?

I have seven photos of the magazine's pages relating to Blakesley Hall Railway waiting to be sent to you. I do not know how to send attachments via this site so please let me know your email address. Have you tried toysteam31@gmail.com for me?

I am not good at navigating around sites such as this. I have an email with first effort copies of an article I wish to send to you, I know you have been unable to reach me through my usual email address so please try toysteam31@gmail.com 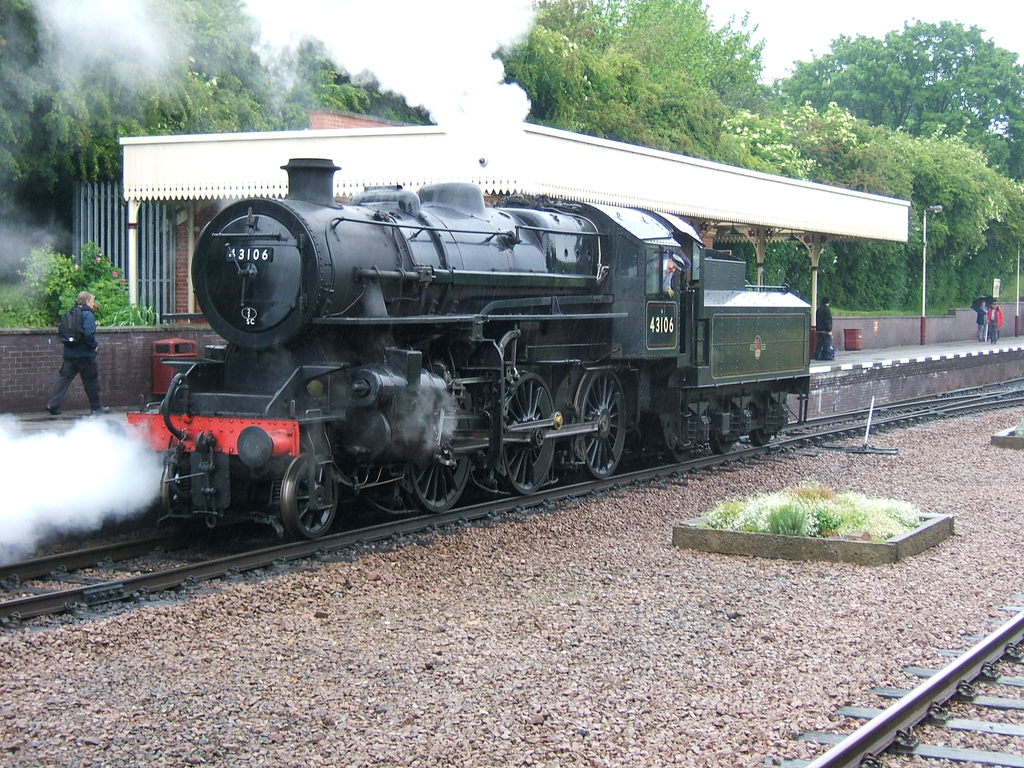 Yes Mark Reader is one if our group. He recently joined us when we discovered he had been planning a layout, also in N gauge based on Kineton for done time. His plans are earlier period than ours so there may well be compromise.

I'll pass on your message when I see him tomorrow evening.

Many thanks for the welcome Dick. I am one of Frank's nephews, known as William, or Bill, and son of Jim who was the eldest of the Reynolds boys. There were actually five of them, Jim, Frank, Reg, Ron and Cliff. My father was a policeman and I grew up in Northampton and  have many fond memories of Blakesly.

Yes I am that photographer, the SMJ has fond memories for me and was the catalyst for my intersest in railways. It is hard to believe and I still cannot believe it myself that some fifty years on as a trainee fireman on the GWSR that I fired a 9F between Toddington and Winchcombe hauling a goods train which is where the goods ran after closure of the Stratford  to Broom section in 1960.

After the demise of the pick up goods with its ex MR 4F loco all traffic that came into the SMJ yard at Stratford was handled by the duty loco at Stratford GW. This loco was almost always a 2251 class loco that was primarily used to bank freights out of the GW station in the up direction until they were all cleared out around early 1964. After that various small ex LMS or BR standard 2 or 3 types were used for a while but by early 1965 there was often no loco available for this duty and by 1966 all banking duties had been withdrawn. Until the ex GW sub-shed at Stratford closed the 2251 allocation was serviced at Tyesley after closure they were moved to Leamington ex GW. If you give me your direct e-mail I will send you a load of notes concerning the activities at Stratford GW that will allow you some perspective of how the railways at Stratford operated. I don't think it appropriate to lodge them on this site as they are not strictly SMJ line related.

The wagon labels I have posted show the ash traffic to Ettington as described by John Jennings.The traffic has originated from various western region engine sheds. The recipient at Ettington was a Mr H.J.Jaques. Although the labels are from an earlier period than discussed.

After the demise of the pick up goods no traffic came to or from Stratford to either Ettington or Kineton. I was in the brake van of the trip working that went to clear the remaining trucks from these two stations. The guard had been told that all traffic for the MOD was routed via Fenny Compton and empties there would go out that way. The situation at Clifford Sidings was a little better. It remained open for traffic because of a contract with a local coal and ash merchant who had ash delivered in standard 10t open trucks from various loco sheds that were still open for steam. I remember that the labels on the trucks indicated various sources including Leamington Spa and Nuneaton. This traffic came in via the GW yard at Stratford and was trip worked by the Collet 2251 class loco kept there for banking duties. This was a daily trip regardless of whether any traffic was about because as there was no fresh drinking water at Clifford a churn of water was taken up daily. If there was no traffic to move this would just be taken as a light engine move to remove the necessity of a brakevan and guard. The final traffic to Ettington was fertiliser in sacks and Kineton received coal and fertiliser. I believe the merchant was an agent of Warwichshire Farmers Co-op. The ash merchant at Clifford just seemed to vanish after the supply of ash dwindled due to the on going closure of steam loco sheds. The SMJ yard at Old Town handled coal and bagged agricultural traffic until around summer 1963 again this was worked down from the ex GW yard at Birmingham Road. The two merchants involved were Dingley's and the CoOperative Coal dept.

Hi Dick thanks for your reply re Byfield/Woodford

The social Club is holding an open day again this year

It was a good day

Robert Blair said…
Hello Dick, sorry it has taken me so long in getting in touch with you, but thankyou for your reply dated the 15/11/2010. More info on Harold Drinkwater 1882-1941, census records for 1911 his age was 29 & a Signelman & Porter, so I don't really know when he started & left that job at the station. I took all the Blakesley Station photo's & Blakesley Map to show my Dad , well all the memories came flooding back (to say the least), & we spent well over an hour, (dad talking, me listening) about the picture's & map. According to Dad that was his "Heaven" knew every inch of that area, even where to pick the "Best Mushroom's" at 5.30am, & went on to say that "they were the Best Summer school Holiday's he ever had". Sorry to say they stopped when the war came along.I will have to pop over to Blakesley some time as Dad did mention that he carved his initial's on the wall of the bridge, I don't suppose they are still there!!!, also he did say that he remember's the name Tew being spoken, & a Mr & Mrs Franklin lived opposite Bertha & Harold's house. Hope you don't mind me asking , but do you live in Blakesley? It's just that I am doing the Family Tree ,& we have a Mary Ann Drinkwater 1834 married to a Joseph Bodily 1824-1907, any connection's?. Well that's all, (sorry if it got a bit boring) , & "THANKYOU" once again for the photo's. Kind regard's. Carol.

Robert Blair said…
Dick, Thankyou for your reply on 04/11/2010 to my husband about our interest in Blakesley Station.The lady you mentioned, Bertha was my Great Grandmother, & her eldest daughter Mabel Annie was my Nan, & her sister's were Grace & Joyce. My Nan, on a couple of occasion's on a Sunday afternoon took me to see Grace & Derek who then lived at Woodend. I would be very very happy to hear of any more information or storie's, & possibly if you were interested & could spare the time, in meeting up with me, to share these.Ooop's forgot to mention that Bertha was the wife of Harold Drinkwater, Signalman/Porter at Blakesley Station (1920's-1930's), Also love all the photo's, can't wait to show them to my Dad (Eric Fairey), Mabel's son, ( he's the one who started all this !!! ). Hope to hear from you soon. Kind regard's Carol.

Simon Dunkley said…
I'm from Northampton originally, and brought up in the knowledge that I have a local surname, local including a large part of the county. (Surname appears to be reasonably common in Leicestershire, too.) Exactly where it is from and what it means is a matter of debate.

David Chambers said…
Dick
Sincere apologies Mr Whitmore was indeed a driver I had him mixed up with aother.
Cheers
Dave Chab Chambers