The Sad Demise of the Stratford Slip Coach Service

‘Through Carriage to London’ announced the proud notice at Stratford Old Town as the 7.45am train for Blisworth prepared to leave from the ‘Up’ platform sometime in the 1930s. Would be commuters were directed by station staff to a smartly maintained LNER ex-Great Central slip coach attached to the back of the train. It contrasted greatly with the two ancient now LMS owned coaches which formed the rest of the train. As the signal pulled off the train set off at a leisurely pace towards Byfield, stopping en route not only to pick up the occasional passenger but also milk churns bound for London via the Great Central route. At Byfield the slip coach would be met by a LNER loco probably an ex GCR N5 tank and whisked off around the curve to Woodford, along with the milk churns, where it would be quickly attached to the Mansfield-Marylebone express. Passengers in the slip coach would arrive at Marylebone at 10.48am after a 3hr 3mins journey. Not exactly express standard.

The return journey to Stratford would be more exciting and much quicker too by means of the crack 6.20pm Bradford express. The slip coach having been carefully checked over under cover at Marylebone, would be attached to the main train, with a further slip coach behind it which was destined for Brackley. This was to be slipped at Finmere and worked forward to Brackley tender first by a Woodford loco, often a B7 ‘Black Pig’. There was much competition for the perceived potential first class custom in ‘Lark Rise to Candleford’ country and the Finmere slip coach was in direct competition with GWR slips made at Bicester. Both slip coaches were protected at the rear by both white and red lamps and were manned by Marylebone based guards, while the main train guard would be a Leicester man. The loco at the head of the train was invariably one of Leicester’s famous ‘Jersey Lily’ Robinson C4 4-4-2s and, surprisingly for such an important train, not one of the new Gresley B17 ‘Footballer’ 4-6-0s that had taken over most of the other principal GC line services. Leicester shed was not to receive B17s until early in 1936, and the 6.20pm being a Leicester crew working provided an 'Indian Summer' for the distinguished veteran C4s with some of their very best ever performances put up on this demanding working. The Woodford slip would be made around about the site of the closed south curve junction. On arriving at Woodford the coach would be attached to the 6.30pm Blisworth – Stratford train, which had made a detour from Byfield. Pity any passengers travelling from Morton Pinkney or stations further east who would have wasted nearly an hour on their journey to Stratford, being thus diverted so that the slip coach could be picked up! There followed a leisurely run to Stratford behind a MR Johnson 2F 0-6-0 arriving at 8.37pm, with a respectable overall journey time of 2hrs 17mins from Marylebone to Stratford.

This Stratford slip coach service had run since early Great Central days but was withdrawn at the start of the First World War and not reinstated until a few weeks before the 1923 Grouping, so it did run briefly during GCR/SMJR days but mainly during the LNER/LMS period. Nevertheless the SMJR Rulebook contained an appendix of no less than 9 pages of regulations concerning slip coaches even though no slipping ever took place on its metals!

Presumably this appendix was copied from the GCR rulebook. The only rules really relevant to SMJR staff were:- 1) the coach must be coupled to the train by an ordinary coupling until the train arrives at the last station before it is to be slipped ie. Marylebone, which meant it was always normally coupled while on the SMJR. 2) the special red and white slip lamps were to remain within the slip coach after slipping, but would be replaced by ordinary tail lamps for the remainder of the journey. 3) any problems or irregularities in working should be reported to the General Manager. 4) slip coaches even when not being slipped could not normally travel in trains other than those to which they were timetabled to run with.

On a fateful evening of 19th December 1935 the Stratford slip coach was full with Christmas shoppers. The train headed by C4 4-4-2 No.6086 consisted of 8 coaches including the two slips.  The Finmere slip went as planned, but calamity struck when the Stratford coach was slipped. Something went wrong with the valve on the main train’s brake pipe causing its brakes to automatically come on. The driver feeling the brakes come on assumed that the guard had applied them and that the slip had not been made. He had looked back for the slip coach guard’s hand signal to confirm that the slip had taken place or to see the white headlight carried at the front of the coasting slip coach, but his view had been obscured by smoke drifting back from the ’Jersey Lily’. It was his responsibility to make sure whether or not the slip had actually taken place and he had not done this. He decided to stop the train at Woodford in order for the slip coach (which had already been detached!) to be uncoupled. The smoke which had obscured his view also made it impossible for the slip coach guard to see that the main train was braking hard to make an unscheduled stop at Woodford. The inevitable happened near the Eydon Road bridge.  The slip ploughed into the back of the main train with enough force for its underframe to override that of the main train’s brake coach. Both guards were badly injured but mercifully survived as did the 9 passengers injured. The Ministry of Transport conducted tests on 2nd January 1936 to try to ascertain what went wrong. The inspecting officer concluded that the LNER brake pipe equipment was unsatisfactory and recommended that it should be replaced with GWR type equipment. The LNER had not wasted any time making its own inquiry the very day after the accident and decided to withdraw all its slip coaches permanently immediately. The Stratford through coach service continued as a normal working for a short while but was soon withdrawn altogether. Leicester soon received B17s to work the 6.20pm which now had a more demanding schedule with stops at Finmere and Woodford scheduled and with no coaches slipped en route.

Amazingly the archaic, labour-intensive and potentially dangerous practice of slipping coaches continued elsewhere on the Western Region of British Railways until 1960! The Bicester slip was in fact the last to go. With many thanks to Alwyn Sparrow for supplying details of SMJR rules and regulations regarding slipping. 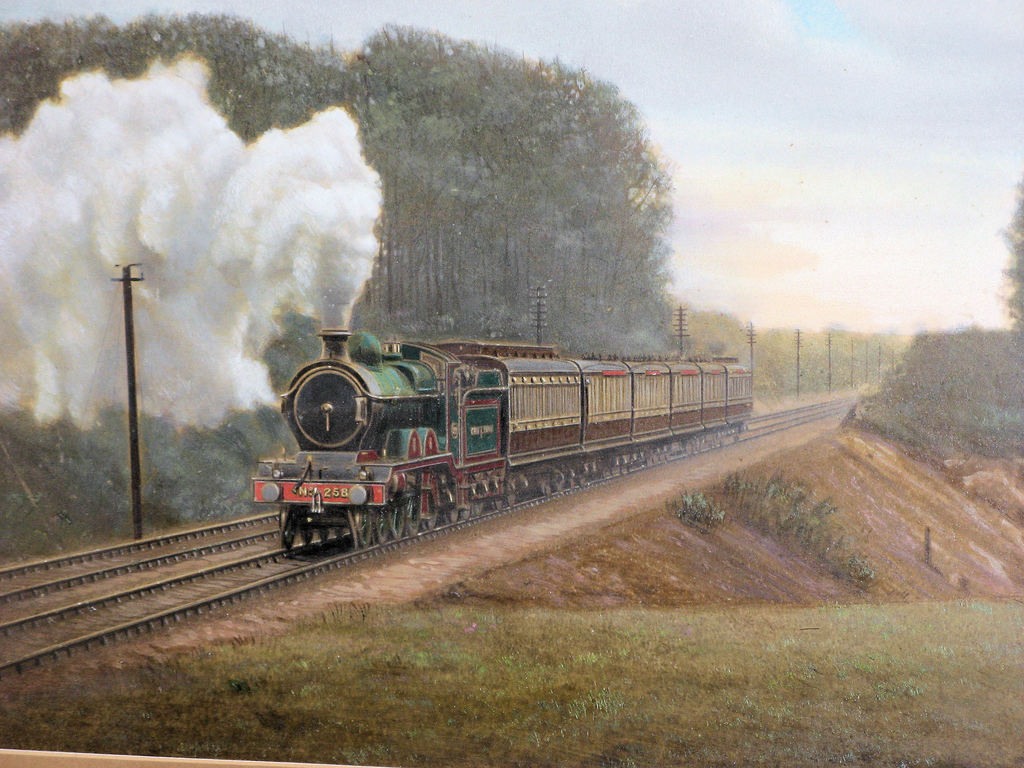 A Jersey Lily Atlantic similar to the one on the fateful Bradford express shown in GC Days. This one was one of the compound versions of the class.