The Wandering 1500 Railtour traversed the SMJ from Blisworth to Stratford upon Avon on Saturday 5th October 1963.  It was, I believe, the last passenger train to pass through Towcester - but I'll stand to be corrected, I often do.  I was a passenger.  I left my home at Towcester at a gristly hour in order to catch an early train from Northampton to Euston, on my way to Broad Street station.   As the train passed Willesden, a line of steam locomotives on the shed outlet road were all belching thick yellow smoke, and all except one were in a state of filth that is now unimaginable.  Number 61572 was nicely cleaned-up, and the coupling rods were painted red, in accordance with Great Eastern practice.

The arrangements under which 61572 were to haul the special would now cause apoplexy, or worse.  It had been withdrawn from service in 1961, and stored at Stratford shed. It was by no means in scrapyard condition, thanks to the late Bill Harvey.  In 1962, it was purchased by a group formed for the purpose and moved to the old shed at Bow, where it slept quietly.   A few days before the tour, it was towed to Willesden, where it was serviced, and the fire was lit.  There was no test run; the Westinghouse brake pump, which had seized, was freed with the aid of a bucket of paraffin and a hammer, plenty of oil was applied to all moving parts, and 61572 was ready to go.  The train was well on its way before somebody in high authority became aware that it was being hauled by a locomotive that did not belong to B.R., with who knew what implications in the event of mishap.

The train started from Broad Street station on time at 9.20am, and ran to Finsbury Park, Hitchin, Bedford and Northampton.  The tour organisers would have liked to turn left at Ravenstone Wood junction, but it was no longer possible. 61572 went on shed at Northampton, and I believe that coal was taken on.  Then tender-first to Blisworth, where the train was manouevred into the SMJ yard, and 61572 ran round, to work chimney-first for the remainder of the trip.  The climb to the first summit at Gayton was of some interest, since it had previously defeated the Midland compound No 1000, which stalled and had to reverse the whole length of Blisworth yard for a second attempt.  61572 managed the climb in fine style. The Wandering 1500 joining the SMJ at Blisworth ( Peter Fleming)

On reaching Towcester, we sat at the home signal for some minutes before entering the station.  From my position in the train I was unable to see what was happening, but my long-suffering parents, who were on the platform, were able to tell me that the train was flag signalled by the Station Master, Mr Dines.  I believe that I know the reason for this.  For some time past, the home signal had appeared to be inoperative, and I had seen the morning pick-up goods run briskly into the station under the indication given by pulling off one of the UP starting signals.  Perhaps our driver was not aware of this arrangement, or perhaps it was felt that something that was acceptable for a pick-up goods simply would not do for a passenger train. 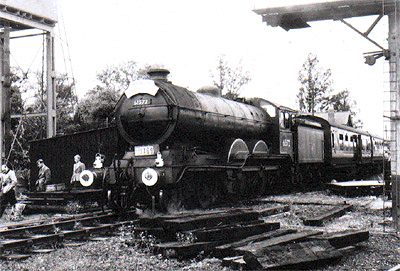 The B12 seen at Towcester

After a photographic stop, we went on our way.  As we crossed the Great Central line, the steam of a southbound train could be seen, and then there was a stop at Byfield to cross an eastbound freight, drawn by Hall class No. 6945 ‘Galsfryn Hall’, a Cardiff East Dock engine.  In the way of railtours in those days, this was treated as another photographic opportunity; the driver of the Hall couldn't have been too impressed by the number of people wandering around on the line.  The next stop was at Fenny Compton, where we waited - and waited.  Our guard, who did not know the road beyond Fenny Compton, was to be relieved, but some planning had gone awry.  Eventually, after a long wait, a DMU coming from the direction of Banbury, stopped to allow our new Guard to disembark, and we were away again, progressing steadily through the countryside, and eventually reaching Stratford.  After stopping at the Old Town station, we were banked with great gusto by a 2251 0-6-0 round to the Great Western line, then proceeding to Leamington Spa and Rugby, whence the grand finale was to be a non-stop run up the main line to London.

61572 went onto Rugby shed, and was there for a long time.  I understand now that the fire needed cleaning, because it had deteriorated during the long wait at Fenny Compton, and also that the brake pump may have needed attention. It had given trouble during the journey, and some old cine film exists which shows David Butcher, who officially was not on the footplate at all, climbing round the outside of the cab with the train on the move, and attacking the pump with a coal hammer.  David's presence has only been openly acknowledged in recent years.  He had been a fireman at Southend, and so was thoroughly familiar with the 1500, or B12 class, whereas it was a strange and foreign creature to London Midland firemen.  The problem was that in 1963, he was Assistant Yardmaster at Kings Cross Goods, and therefore Management.  This might well have caused ruffled feathers at the time. I began to be concerned as to whether I should be able to get back from London, and eventually caught a train to Northampton, and called it a day.  Only in recent years have I discovered that a stop was made at Bletchley, to meet the needs of such as I. I could have been there when 61572 reached between 65 and 70mph South of Kilsby tunnel.  Oh well.... 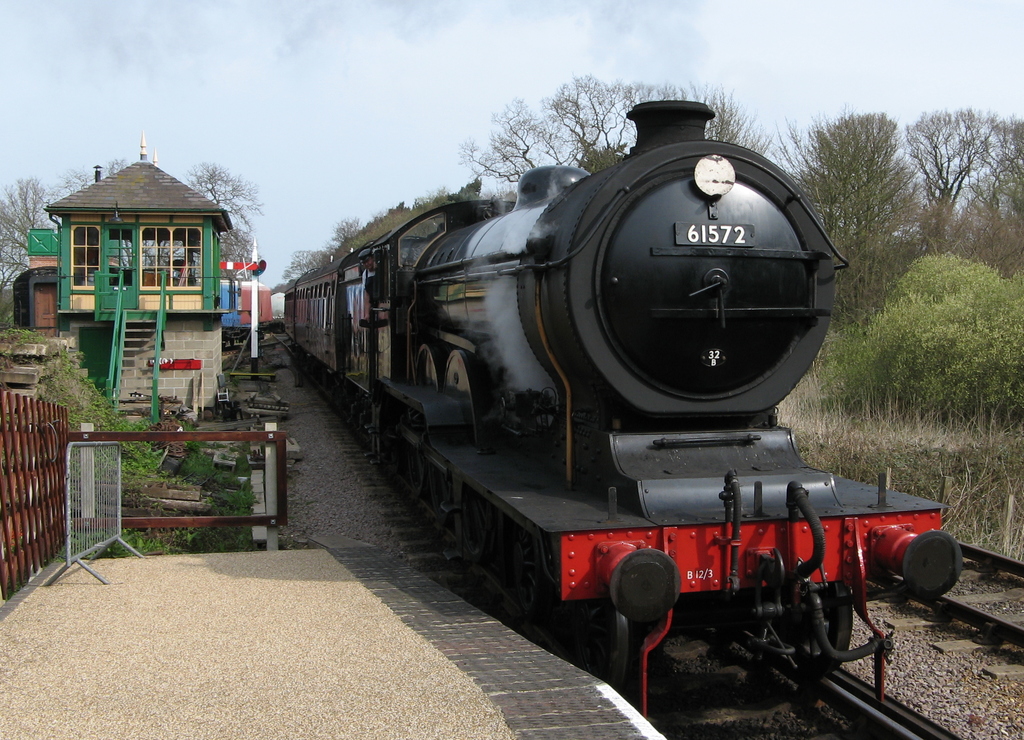 61572 seen at Holt as preserved on the NNR, since this was taken it has been painted in GER livery ( D. Bodily)

One of my occasional pleasures on a summer evening is to park my car beside the Boddington to Claydon road where it crosses the Oxford Canal, and walk along the towpath to Wormleighton Reservoir.  Just before the reservoir, I pass the abutments of the bridge that carried the SMJ line over the canal, and try to picture it as the Wandering 1500 passed over.

I'm really impressed with Bob's brilliant, detailed account of his trip on the SMJ