The land was leased from the Hesketh Estate for working ironstone, but the thick bed of clay on the leased property provided the material for a brickworks. While the Ironworks was to the east of the Towcester-Tiffield road, the brickworks were situated about a mile away, on the west side of the Towcester-Northampton road. A standard gauge railway was built to mainline standards between the two sites that crossed the Northampton road on the level, with a Hunslett Engine Co loco (119/74) being delivered new in February 1874 and named ‘Forward'.

The ironstone quarry on the east side of the Northampton road had a narrow gauge tramway to remove the ore to a tipping dock over the standard gauge line. By 1878, the Furnaces had fallen out of use and Samuel Lloyd negotiated to lease his land to the Easton Estates and Mining Co. Ltd, to include the Furnaces in 1881 but everything closed in early 1883 and it is thought that the Hunslett (119/74) was sold at this time. Records show that it went to Stanton Ironworks Co. Ltd. but it is not mentioned in the Stanton records. In 1889, a new company entitled the Towcester Mineral & Brick Co. Ltd took over the land and began removing ironstone.

In April 1891, the Towcester-Ravenstone Junction railway line was opened and a connection was made at Easton Neston for shipment, with the line crossing the Northampton road on the level. It was at this time that the line form Lloyds Sidings to the brickworks site was lifted and in December 1894, a Hudswell Clarke loco (427/94) was purchased.Business did not flourish too well and the TM&B Co. Ltd. went into liquidation in 1902, with the brickworks closed and the Hudswell Clarke loco advertised for sale in the Manchester Guardian on the 6 November 1902 and sold to the Woolpit Brick & Tile Co. Ltd. of Suffolk.

However, 1903 saw the quarries begin production again, under the leadership of Richard Harry, who had signed the required documents on behalf of the TM&B Co. Ltd. Unfortunately, he was drowned in the flooded brickpit in 1908 but his widow and her brother carried on the business with the same Company name. A new tramway was laid down in 1912, running parallel to the S.M.J Railway to serve new workings, moving eastwards from the old Catchgate quarry, close to a new lime kiln.


Horses were used at first, but in late 1914, a second-hand Bagnall was acquired from A.C. Bealey Ltd of Radcliffe, Lancashire and named Ferrett II. 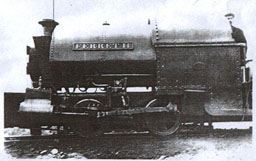 The overburden in the quarry running E-W that was North of the of the clay pit and west of the Northampton-Towcester road was approaching 35' and it was for this reason that a 12t Ruston steam navvy with a 2 cu yd bucket (RP390/14) and a No 4 SND Transporter (RP 398/14) were delivered in May 1914. While the overburden was mechanically removed, the ironstone was still removed and loaded by hand.It was around this time that the narrow gauge line was extended on the level over the Northampton road near the Showesley turn, with a branch to the ironstone quarry on the west side of the main road. There was a square building at the southern end of this line which housed an office, the stores, a forge and workshops close to a corrugated iron loco shed with a water tank. The quarry to the north of the clay pit was known as the Russia Pit, while that on the other side of the Northamptonroad was known as Canada Pit, the origins of these names are not certain.


Methods of getting the ironstone out of these quarries were quite different. The overburden was removed in Canada Pit and the ore loosened by the use of picks,ensuring that a pillar was left untouched until, with a look-out man in place, the pillar was knocked out and the whole section started to crack with the ore then being loaded into tubs by hand. The overburden was much deeper in Russia Pit, but once the ironstone had been bared, it was loosened with the use of explosives and then loaded by hand into the tubs. Form Russia , the tubs were hauled by steam loco across the main road to the calcine bank to join the output of Canada Pit.

(A calcine bank by the way is where alternate layers of ironstone/ore and coal were made up and then ignited. The pile could take a month or so to burn out and the remnants were then termed "calcined ore", which had a higher iron content than the raw ore. This meant transportation costs on to the Furnaces were lower)


A greater prosperity was brought on by the onset of WW1 and plans were made for expansion in 1919, when advertisements were placed in The Engineer and Machinery Market looking for a 7 or 8 inch loco of 2'6 gauge. No such loco was forthcoming, so another Bagnall (2103/19) was purchased new in July 1919 and named Ryder Gibson. This loco was used exclusively in Russia Pit, with the face being worked to both North and East. Prosperity did not last long and the post-war depression in the industry led to the quarries being closed before May 1920. The whole area, including parts of Tiffield, Gayton and Blisworth was put up for sale by the Blisworth & Towcester Estates Ltd. but it was not until 1935, when Richard Thomas & Co. Ltd took over the Blisworth & Gayton areas.


In 1925, Ferrett II was sold to Blackwells of Northampton, removed by road and then sold on to Holm & Co., Kingsnorth , Kent . Ryder Gibson was put into steam in 1928 to provide movement of tubs, track and other equipment to the roadside once it had been decided to dismantle the system, because the level crossing had been removed during road repairs and improvements. The loco was then sold to Thos. W.Ward and they in turn sold it to Hendy Merthyr Colliery Co. Ltd.

No restoration of the site was ever undertaken.