Clive Boardman was a fireman at Woodford from 1956-8. This was before the Stratford south curve was installed. He remembers night time workings on loose coupled freights along the SMJ in the days before Woodford's Aussie fleet became run down.

''I did fire on many occasions over the S.M.J. to and from Evesham, always on W.D. 2-8-0s and always evening and night (there were no Woodford workings over the line during the day when it was occupied by 3F and 4F 0-6-0s from Blisworth). The first Woodford working was the 7.20pm Bristol. Sometimes the outward workings would get through to Ashchurch before changing over, although I never got beyond Evesham myself and I think I only worked over the line in daylight once.

The only deviation from the norm in my own case was when Reg Langstone and I took two wagons of cattle to Kineton with a B16 4-6-0 one lunch time but this was really just a matter of expediency, the cattle couldn’t be left standing around in the yard at Woodford, the B16 would have arrived in the early hours on a fully-fitted from York and would be idle until returning in the evening, so it was convenient to use it to get the cattle to Kineton quickly. Reg was not known for hanging around and as we approached Woodford West Jct. we were doing probably 15-20 mph. The signalman was waiting to take the staff, decided we were going far too fast and quite rightly refused to take it, waving his arm in a negative gesture and turned away from me. I shouted across to Reg but he was gawping away across the fields and didn't hear me. I had to cross the footplate and tap him on the shoulder, showing him the staff. He banged the brake on and, because we couldn't set back, of course, I had to walk back probably about two hundred yards to give the bobby the staff. I never heard the term 'Bloodspitter' in connection with the B16's when I was on the footplate but it refers to their tendency to throw red hot cinders out of the chimney when being worked hard.  I did a piece for Robert Robotham in his book "Great Central Railway's London Extension" in which I mentioned this particular idiosyncrasy. At Woodford in my day they were usually known as 'North Easterns'. I always liked the B16s as they were quite comfortable to ride on and usually steamed well once one had become accustomed to the long box and its healthy appetite for coal at the front end.

A B16 'Bloodspitter', a type Clive liked to fire.

Although I was never on it, there was an ironstone working which booked on at 1.30pm, known as ‘Banbury ironstone’ and always worked by an L1 tank, which in the course of the diagram collected the loaded ironstone from Charwelton and conveyed it to either Byfield or Banbury, I can’t remember which. There were no fitted workings over the SMJ in my day. The WDs, either Woodford or GW, were ideally suited to the diagrams and were more than equal to the task on the outward workings when they were fresh off the shed. The problems occurred when returning on something that had originated in, say, South Wales, and the fire would sometimes be very dirty. I don't know whether it was true but the story was that a Western Region edict required engines on loose-coupled workings to cover 200 miles between fire cleanings, something that the number 3 link crews normally on these jobs could well have had reason to believe. I don't know much about what happened after I left the depot, but certainly in the last months of 1958 before I left there were many drivers learning the road down to Honeybourne in preparation for re-routing of the trains. '' (The proposed rerouting Clive refers to was to be over the South Curve at Stratford rather than via Broom, Woodford men were learning the GWR route to Honeybourne in preparation for the increased workings over the SMJ that began around 1960.)

'' I didn't work on any single lines before the S.M.J. and can't remember much about the staffs and tokens in any detail. I can remember that he one from Woodford West Junction onwards was an actual steel staff, about 18 inches long by 1.5 inches in diameter. Changeovers were always effected at very low speed and there was always a pool of light outside the signalboxes where the manouvre took place. The easy ones were those in which the staff or token was contained in a leather pouch with a large loop attached, you've probably seen them, and with these it was just a case of putting the loop onto the signalman's outstretched arm and collecting the] one for the next section at the same time. '' 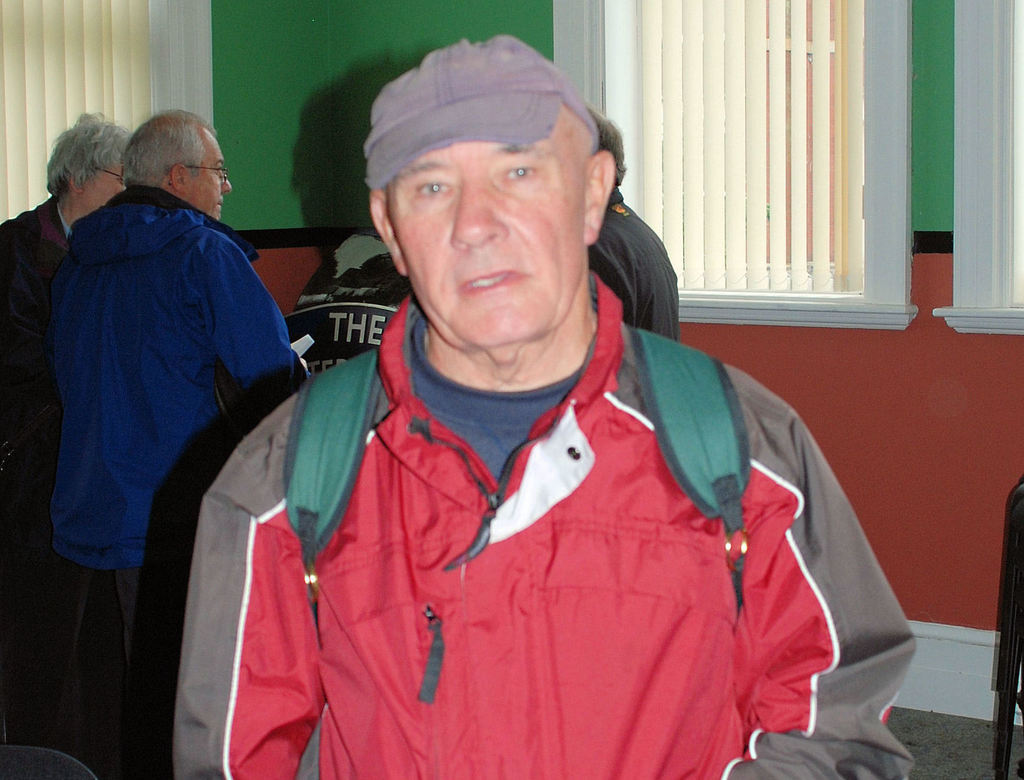 Clive seen at the GCR Woodford 50th Anniversary in June 2015

(Many thanks to Clive for allowing parts of his correspondence with Dick Bodily to be used in this article.)