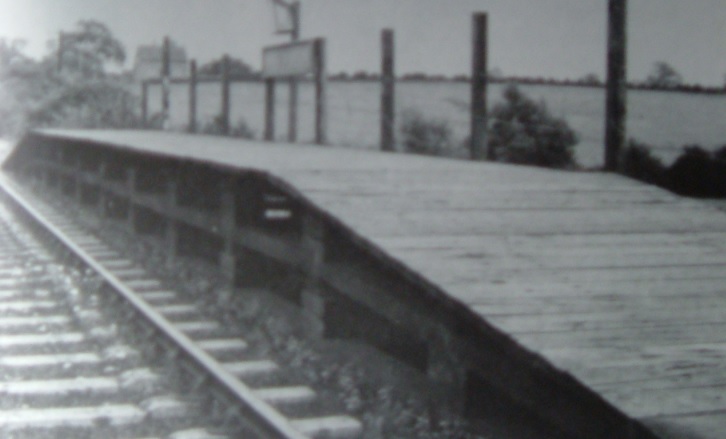 Tiffield was known as a "CONDITIONAL STOP" according to a book on the N & B R. This meant that a potential passenger had to signal by hand to the engine driver to stop the train. The term "Halt" was not used until the early 1900's. See above how Tiffield stop may have looked.

More info on Tiffield Halt, from a person ( aged 83) who was born in Tiffield and whose father worked on the railway in the Towcester area.

" The halt was on the embankment where Meadow Rise now is, approached by a footpath next to the cottages just before the pub ' The George'. The footpath, known as the jetty, ran to some wooden steps, up the embankment to a small area of sleepers, much lower than a normal platform. The halt was used by railway staff and platelayers, the gang based at Towcester. "    and

" There was a butchers hut / slaughter house from which the trains used to collect meat to go to market. "

This implies that the hut was very close to the halt.

Very interesting - This goes right back to my initial post last June at the start of this thread, so we've actually come full circle!

I too had the info from an "old local" (I'll have to dig back in my records to see if I still have his name) who knew someone who remembered the platform by the steps.

The slaughter house is new though and is very interesting - and it would be quite logical if the railway used the same site that used to be the old halt. The mention of Towcester races also fits in with my info about an extra block section being created to give additional line capacity on busy days.

I don't know just where this leaves us with the exact position of the Tiffield station though. I've no problems with the other theories as to its location, which all stack up well, but to some extent they do rely on the station being at the mileage point shown on the Bridges List on this website. But - where did that info come from in the first place? This puts it at a very precise 2miles 56  chains from Blisworth - so does that measurement have any official origin? If we could somehow verify that fact it might take us a bit nearer.

Also of interest is,

"there was a small siding on the Towcester side of Caldecote Road bridge, so they could let the train pass when necessary. "

He also mentions the Ro-Railer in 1933, probably the last journey it ever made.

I have checked the bridge number list and numerous old maps, but the siding is not listed.

There is a colour photo available of the butchers hut, and I am seeking permission to place it on this site.

I haven't heard of another siding between Tiffield and Towcester - but you never know!

On the subject of the station at Tiffield - take a look at the oldmaps.co.uk website.

See the plain area outlined with a shallow curve, indicated on the west side of the embankment, just between the footpath and the underbridge.

Is this "flat" section where the platform was?

Then select the 1900 1:2500 map - the shallow area has now become solid hatching denoting a usual embankment - has the platform now gone?.

I've tried copying these maps but no success.

Bearing in mind that the maps would have been surveyed a few years earlier than their actual dates, this might be possible confirmation of the station site around 1870? 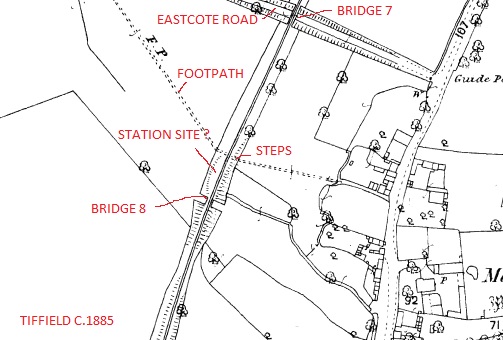 Having spoken directly with my old work colleague who was born in Tiffield, and whose father worked on the railway at Towcester, I can state that the potential site for the Halt was on the embankment but on the Towcester side. See map. The site was only a pile of sleepers not very high and probably just one coach length. Like I said before it was mainly used by railway staff.

Also of interest is that he states there was a passing loop between the footpath and Caldecote road bridge on the Towcester side. This footpath was also a farm crossing with gates, and mention of an accident here has been recorded, when a train ran into the back of a farm cart on the line. This crossing is 10 chains from the bridge and was definitely not Lloyds siding as the points were manually operated. The loop was just a passing place for gangers trolleys in this section.

This is fascinating info Nigel. Seems to confirm that the Tiffield station site was in fact by the wooden steps and not further towards Towcester as suggested by the Bridges Register position.

Which makes me wonder - is that position of 2 miles 56 ch from Blisworth actually the position of the passing loop? That would make sense.

Do you have any idea of dates for the loop - I recall that during LMS days they introduced a maintenance trolley system on the SMJ lines, with the trolleys kept in wooden huts at right angles to the line - I'm sure that there is a pic somewhere showing one.

Two thoughts - if there was an accident it may have been investigated and a report produced - if there is any idea of dates we might be able to find the report.

Also - it was usual for a inspection to be made by the Board of Trade when new sidings, loops etc were brought into use -again if there is a date we might be able to find this.

Remarkable - he did mention a hut, but not what it was made of. If it was made of wood this would explain why there is no apparent trace left of it. Having walked this section late last year I certainly do not recall seeing any huts. The date of this loop being in operation must be in the 1930's and 40's, as he remembers it, which is probably why we cannot see it on any maps as yet - I cannot access any for these dates.

Great to see that the story of Tiffield Halt has developed! Barry mentioned at the very start of the thread that the bridge register document may have been incorrect, and it certainly seems to be incorrect given that there are numerous accounts reciting the station being at the top of the embankment.

Here's an intriguing scenario: The document lists the station at 2 chains from bridge 9, but what if there was an error when the document was compiled? What if somebody made a typing error? Because when the document was made, the creator may have meant something else, such as 12 chains rather than 2 chains. With a single chain being equal to 22 yards, 12 chains would be worth 264 yards, and this measurement of distance from bridge 9 takes you to EXACTLY the top of Meadow Rise where the steps are located, which is where many people's accounts recall the station being. So, was the Tiffield Halt 12 chains from Caldecotte Road bridge 9, and not 2 chains? The mathematics are speculative at best, but certainly seem to stack up with the stories of the Halt being located atop of the embankment.

Just a thought though, but I shall have to get down to Meadow Rise before it becomes too overgrown with spring approaching.

Does the intermediate block post imply a signal box to control it at that point i.e. at Tiffield. Or was it controlled from somewhere else ? By definition this eliminated a passing loop, as the box would have been equipped with token instruments. Any thoughts ?

Just to throw another spanner in the works, there are a few mistakes in the bridge numbers document.