The East & West Junction railway (E&W) proposed a new line from a junction with the Northampton & Banbury Junction Railway at Greens Norton to Stratford Upon Avon.  In 1864 Lady Palmerson came and cut the first sod. The E&W became a part of the SMJ in January 1st, 1909.

I was born and bred in Binton, consequently my first interest in railways was the SMJ and then the GWR at Stratford. At the age of eight I would cycle down to either Binton Bridges or the farm overbridge immediately to the west of Binton station to watch the freight trains pass by. Those going west were often as I recall loaded iron ore trains heading for South Wales, returning as loaded coal trains, usually hauled by either Austerity 2-8-0's or BR Standard 9F's. If only I had a camera in those days as these trains would have volcanic exhausts as they worked upgrade through the station heading towards Broom. The station had long since closed but was occupied by dredging contractors Bomford & Carr, parked in the yard wre a number of Fowler ploughing engines converted from steam power to diesel either with the power unit mounted on top of the boiler or in the tender. Some of these ploughing engines still exist, stored in the open near Bidford on Avon. The station site is now a LPG storage depot, I did however recently have a stroke of good luck and was able to purchase one of the Binton station signs, an aluminium hawkeye pattern. 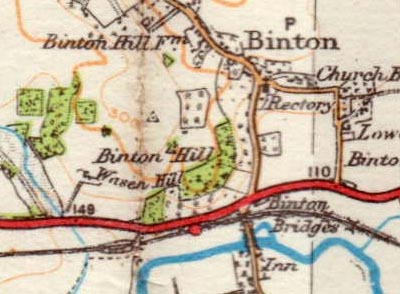