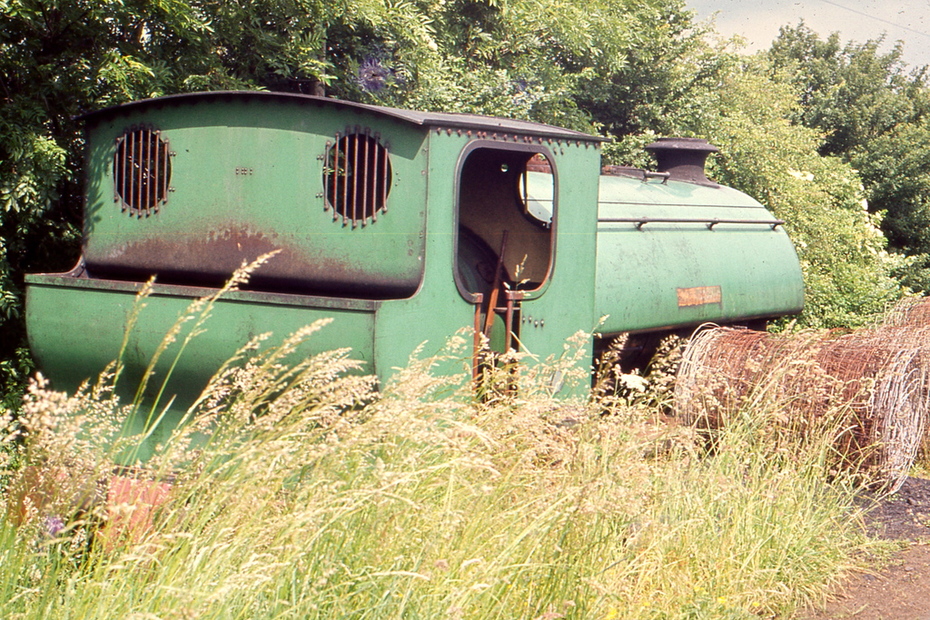 We walked from Byfield station to the junction with Byfield Mines and here found, isolated on a piece of track, the saddle tank "Cherwell." She had worked at both Charwelton and Byfield, but now her days in action were over. She was transported to New Street Recreation Ground in Daventry to become a plaything for local kids, but in 2001 she was rescued. She is now at Rushden Transport Museum where one day she may be restored. What a pleasure that would be.

Looks like restoration is now in the pipeline for real. It has been a long wait. A few years ago I tried to donate railway books to sell or raffle for the (presumed) restoration fund for 'Cherwell', but I kind of got the brushoff from the Rushden lot.

Thanks for this information David. Six inches of concrete, eh? That's a new one on me! Good luck with the restoration.

As the man responsible for aquiring Cherwell for the RHTS I feel I should give an update! This was a response to the Daventry Express when asked about progress  Jan 2009.

The RHTS presented their case and were selected from among some fourteen groups for final custody of Bagnell 0-4-0 Cherwell.  It was important she remained in the county, as together with our Barclay 0-4-0 No 9, from the Irchester pits, thence coupled with our tippler wagons a scene could be recreated truly representative of the once expansive Northamptonshire ironstone industry.

The society has spent initially £2000 on recovery and transportation of Cherwell from Daventry to our Rushden site.  Society members having voluntarily carried out work in preparation for the haulage contractor.

A further £2000 has been spent on crane-age to lift the water tank from the boiler and for removal of contaminant insulation.

General stripping also included removal of concrete that had been laid six inches deep in the cab.  This has been carried out by members, prior to obtaining a report from a certified locomotive inspector.  This report highlighted a major defect in the Copper walled firebox.  Minimal maintenance toward the end of her working career had permitted sludge to build around the base of the water jacket which has caused excessive localized temperatures and subsequent sagging to the walls.  The smoke box barrel is extensively corroded and requires replacement together with end plate and door. Combined with the obvious costs that will be incurred when the boiler is lifted, together with sourcing of missing parts, it becomes obvious a different approach to the raising of finance will be required.

A restoration fund has been set up which includes a single donation of £2600, though it is now apparent support will be required from other heritage charities as it is not expected to see change from at least £130,000.