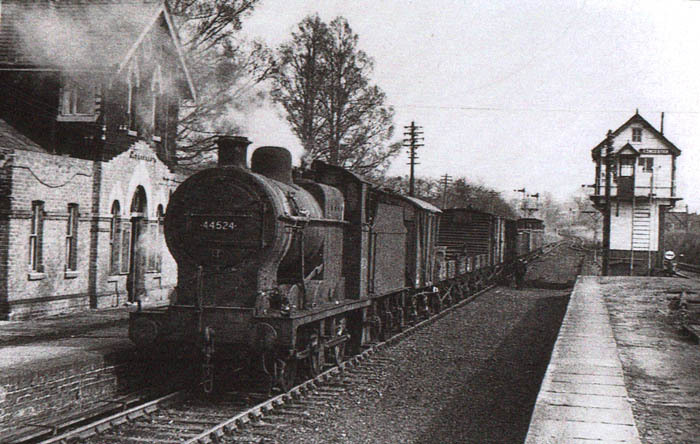 Northampton's 44524 seen at Towcester during the early '60s

Just noticed that it will be fifty years on 3rd February 2014 since the Woodford West-Blisworth Ironstone Mine section closed completely.  Wonder if Tesco could be persuaded to put a plaque up to commemorate it?

Does anyone know when the last freight operated through Towcester, presumably week ending Saturday 1st February.

I got to know the station well at the beginning of the sixties on summer holidays at my grandparents (Grandad had worked on the SMJ and its predecessors from 1897-1947 - his photo is in Arthur Jordan's book - Jim Campion).

Evan Dines ran the whole show and he let me have the run of the place too!  Footplate rides and shunting took place on Fowler 4Fs 44491, 44522 and 44524, Stanier Black 5 45191 and Stanier 8F 48658 at various times (engines mostly allocated to Northampton at the time), but the best was in May 1963 when a WD Austerity from Doncaster (90496) turned up on the pick up goods. Mr Dines had a word with the crew and told me to get on the engine as "he wanted to test points and signals".  Light engine, we moved off Platform One and over the A5 bridge, before setting back on Platform Three and then just past the signal box turned on to the parallel line, stopped and chimney first set off, the driver telling me not to lean out the cab. At what seemed some speed we ran through the goods shed and over the A5 before stopping and reversing back onto our short train in Platform One. 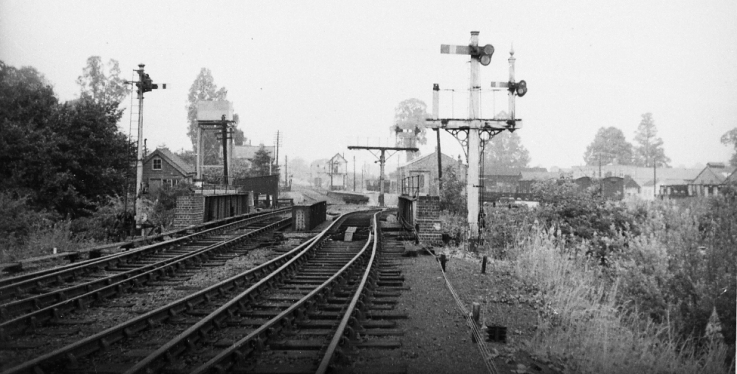 Where I had my ride on the Dubdee (Adrian Vaughan collection)

I suspect that Mr Dines arranged all this for me, as rumours of closure were being talked about at this time - was I on the last steam engine to go through the goods shed?? 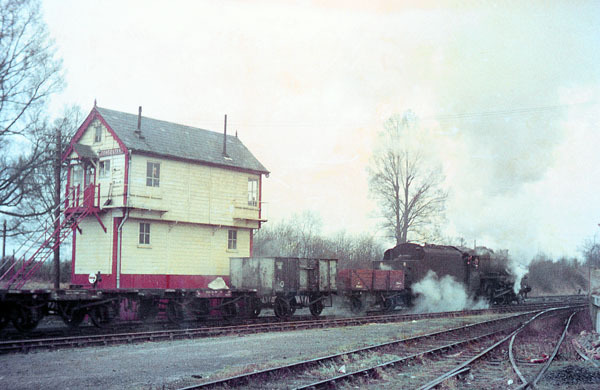 The last steam loco I saw at Towcester was Northampton shed’s 48349 on 12/06/63, but I visited Blisworth Mines several times, the last being on 06/01/66 when all three locos (Ettrick, Blisworth No.1 & No.49) were present. I presume all three were later scrapped?

I managed just one visit to Byfield Mine on 07/05/65 when Cherwell and No.3 Avonside were noted. Charwelton Mine had closed by this date when I paid a visit.

Sadly, my Aunt Dorothy (Dunkley) died last year (2012) but she worked on the railway during the Second World War, firstly at Towcester before being transferred to Roade station. She cycled from Towcester in all weathers, but sometimes Grandad would give her and her bicycle a lift on his P.W. trolley along the railway to the point just before the SMJ crossed the West Coast Main Line! (Probably the old connection into Roade station).

Thanks for this Graham! I know the photo of your Grandad, Jim. Andy