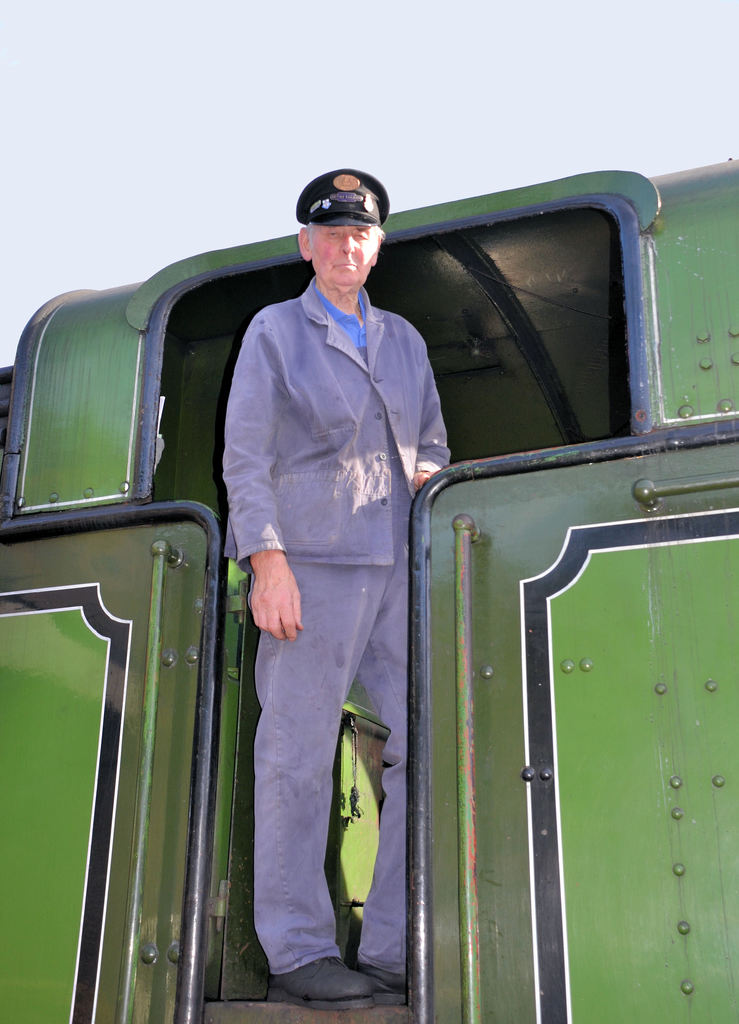 Albert on the footplate of the Gresley N2 tank at Loughborough

During the 1950’s previous to the closure of Stratford – Broom Junction of the SMJR,  five trains each way ran nightly along the SMJ ( Mondays – Saturdays) from Woodford yard to Broom conveying semi-finished steel products, ingots, billets and the like, from the North of England to South Wales.

One man who had much experience of firing on these turns is Albert Fennell.  Albert followed his father Herbert into a railway career at Woodford and his experience on these night time steel trains came when he was a fireman in the No 4 link during the mid fifties.  Several of his family, uncles and a brother, were also footplatemen at Woodford. While in this link Albert was unusually often paired with his own father who was at the time a driver in the same link and says that he really enjoyed working with him.  Herbert passed on a lot of useful knowledge and skills in a kindly patient way to his son and they worked well together as a team. However Albert remembers that there was one period of three weeks when they didn't see each other as they were on opposing shifts.

These heavy trains were almost exclusively worked by WD 2-8-0s, engines from Woodford shed working through to South Wales to return on a return working the following day, sharing the work with Western Region WDs mainly from Welsh sheds, doing the round trip in the opposite direction.  Albert recalls that many had shed codes beginning with 86 but can't remember what the letter was but its likely that they were Ebbw Junction allocated as Newport Pill only had one Aussie and Severn Tunnel junction only a limited number. Photos exist showing Cardiff Canton WDs on the SMJ as well, but these are post 1960 daylight shots.The Woodford crew clocked on just over an hour before departure to allow for preparation and to run light engine to the yard. They worked the trains through as far as the double track Broom South Curve near the still existing wartime concrete Broom South signalbox where they would pull up level with a return South Wales – Woodford train and exchange locos and trains with the Western Region crew, before returning to Woodford. This explains why the curve here was double tracked. The Woodford crews had to be signed as having learnt the route beyond Broom as far as Ashchurch just in case of a very late running return train making the Broom swop over impractical, but Albert says that only once did a Woodford crew actually get as far as Ashchurch and on that occasion the driver was his uncle George Fennell.

The first three nightly trains left Woodford Yard at 7.20pm, 8.30pm and 9.30pm, then there was a gap to the final pair at about 1.30am and 2.30am. What he particularly remembers is that on Saturday nights  he had to sign on at 12.59pm for one of the workings, this one minute to midnight time being a ploy to insure that he got in 6 shifts that week before Sunday. The Sunday rate being one and three quarters of basic pay with these turns open to any crews. There were no trains on Sunday nights/ early Monday mornings as the SMJ was completely shut down from 6am on Sundays  to 6am on Mondays. ( After the new link to the GWR line was put in at Stratford around 1960 sometimes the SMJ line from Woodford - Stratford was opened on Sundays.)

Albert particularly remembers his last night time trip along the SMJ route.  He recalls that climbing Ettington Bank in either direction with one of these steel trains ‘was like going over a mountain!’ On this occasion the previous steel train driven by Walter Callow and fired by Harold Jones had failed at Stratford with a broken steam gauge but worse was to come with the WD that Driver Stan Harris and Albert were crewing. They had taken over the engine with one injector already failed but had struggled on only for the other injector to give up completely as a result of climbing the fearsome bank and eventually they had to reluctantly admit defeat and drop the fire to avoid a possible boiler explosion. Stan had tried to make it to Kineton where there was a passing loop but had only got to within about a mile of Kineton, so Albert set off on foot along the track towards Kineton where he came across father Herbert and another fireman crewing a relief engine sent out from Woodford shed. He says that on occasions such as these it was not unheard of for a duty shift to go on for 14 hours!

Albert moved on to a new career as a coach driver soon after this, one of his duties included driving the Byfield to Towcester Grammar School school coach service which had about a decade earlier been instigated  as a replacement for the similar rail service over the SMJ. Albert's interest in steam was revived during the preservation era and he eventually became a driver on a preserved railway and proudly owns a splendid collection of photographs and DVDs showing himself driving many famous preserved steam locomotives.

NB.  After the new south curve was opened at Stratford in 1960 these steel trains and other through freights ran directly onto Western Region tracks near the racecourse and most traffic transversed the SMJ to and from Woodford during daylight hours. The Western Region who had acquired much of the line beyond Byfield by then had cut back the platforms at Ettington and Kineton and a wide range of ex GWR and BR Standard classes from Welsh sheds began to work through freights on the SMJ. (see The Loco types seen on SMJ Metals page of this website for more details).