Hello all, if you look at the gradient profile for the Towcester to Blisworth line, you can see that there is a 0.64 mile stretch on the level through Tiffield. This starts just after the 2 and a quarter mile post from Blisworth, (actually 2.36 miles) and goes on to just after the 3 mile post near Bridge 10, and it's down hill to Towcester from Gayton. 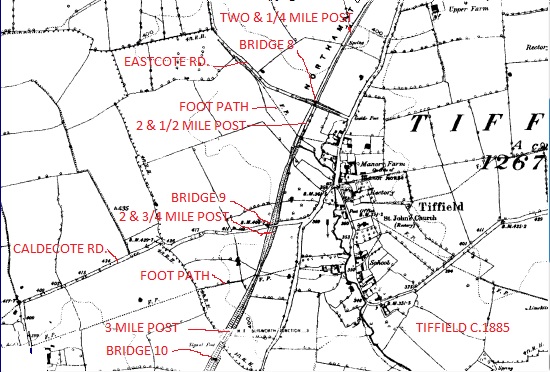 The problem would be for trains heading to Blisworth from Towcester.

Surely then, it would make sense to have the Tiffield halt as close to the start of the level stretch, so that when the train restarts, it will have a decent run on the level, before hitting the 1 in 76 gradient towards Gayton ? Based on the fact that Tiffield halt is near to Caldecote Road bridge, then a train from standing would have just 0.4 miles of level track to get speed up, before hitting the gradient of 1 in 76.

I agree with the logic here - but the detail is actually a bit out according to my copy of the Blisworth to Towcester gradient profile in the 1916 SMJ Working Timetable appendix.

The level stretch referred to actually ends just before the 3 mile post from Blisworth is reached - the gradient profile illustration is rather small, but it does show the level bit ending about 1 and a quarter inches from Blisworth which at a stated scale of 2 miles to an inch, puts it slightly under 3 miles.

Allowing for the necessarily rough nature of the calculation on this gradient profile, this puts the suggested station site of 2m 56ch just about on the change point of the gradient where an up train from Towcester to Blisworth would just be aproaching the level stretch - but possibly not quite on it.

Not an exact science I agree - but see the Riley & Simpson book on the SMJ, where it states that 'up trains had a great deal of difficulty starting from a stand' at Tiffield. This fits in with my rough calculation above and also supports the site of the station at 2m 56ch. If it had been at the alternative site at the top of the steps in the embankment I think they would have been on the level section.

What do you think?

John Evans has some great photos of the line which he walked in the mid 60's just after the tracks were lifted. There is a photo on his Flickr account of what he calls 'probably' the station site. http://www.flickr.com/photos/the-evanses/8040772960/

Some lively discussion here folks! I'll be heading up to the proposed side off the Caldecote Road at some point during the week or next weekend. I did a rough visit a couple of weeks ago on limited time and resources and managed to get a few photos. My preliminary findings were that the profile of a small wooden halt was obvious, as a large section of cutting was significantly smaller and would have been easily accessed by a small path off the Caldecote Road. When I visit the site again, i'll be taking a more extensive, detailed look.

Going back to my posting of Sunday re: distances on the gradient profile, I must now eat some humble pie! I've realised that the gradient profile that I was using had 'shrunk' during the photocopying process, and therefore my 1 inch measured across the page did not equate to the stated 2 miles!

Both potential sites for the station are therefore definitely on the level bit.

I agree that a site visit when the vegetation has died down might provide some more clues. Somewhere I've also got some photos along the line when track was still in place - I'm wondering whether the Caldecote road bridge area might be amongst them. 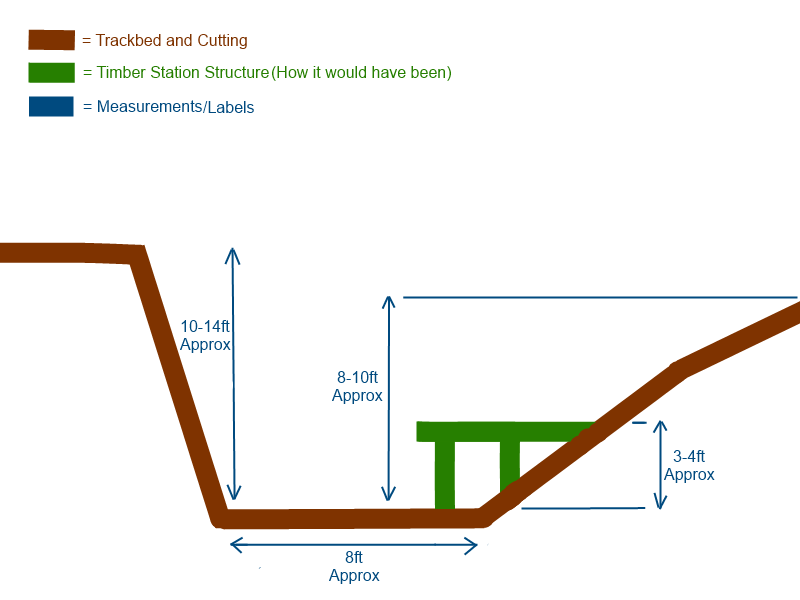 Sorry there has been no discussion from me over the past few days, as I've been busy with other business. But speaking of site visits, I've been for a ride up to the Caldecote Road site this evening to have another look. This was mainly for me to build a profile of the cutting and take some approximate measurements of the trackbed/station site. I return with the same conclusions, the trackbed widens out and the cutting wall on the Tiffield side is much lower than the opposite side, but that is what we already know. I have made a rough drawing of the cutting and measurements in this photograph, which includes the station and how it would have looked. The image is looking towards Blisworth.

I visited Tiffield this afternoon - but couldn't find an easy access onto the track bed between the cattle creep bridge #8 and the Caldicott bridge #9 - did you manage to get any photographs of the bridge #9 from the track bed?

The best way onto the track is a small clearing to the west of bridge 9, where a footpath crosses the tracks on a stile. The stingers are easy to overcome, just walk from there to bridge 9. Unfortunately I don't have any images of bridge 9, but I do have some of the station site, which are located here: http://www.smj.me/photo/album/show?id=3138568%3AAlbum%3A51251&x... 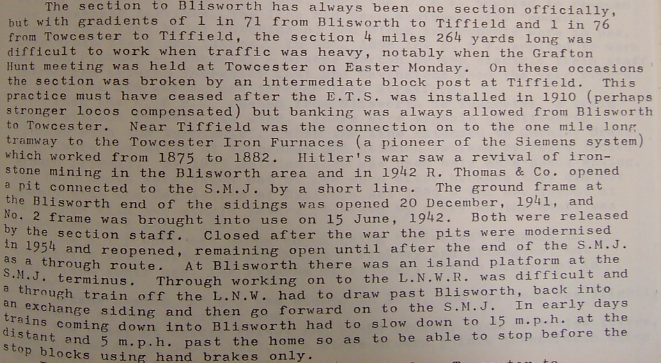 Thanks Nigel - that confirms my post of 21st June last - I just couldn't trace where I first saw the mention of the intermediate block post, but I know I have a copy of the Clinker document somewhere, so that must be it.