Some time ago we ahd an interesting and lively discussion on the mystery station at Tiffield, which added quite a lot to our collective knowledge.

I've recently been looking closely at two of the other mystery stations- at North End (sometimes Northend) and Warwick Road-or were they one and the same perhaps?

The essential reference for station opening/closing dates now seems to be M.E. Quicks large tome and its various supplements.

This gives (info taken from from Bradshaw timetables only):

I have done considerable research at both Kew and in local newspapers of the period, and the following items/dates are interesting-

3rd June 1871 -Inspecting Officer of Board of Trade report of opening from Fenny to Kineton- description of the two terminal stations, but no mention of others.

13th Aug 1873- Kineton Horticultural Society show - "patrons can return to Ettington and Stratford only by the 9.14pm train or by special train to other stations at 9.15pm, which will call at North End at 9.25pm"

26th and 27th June 1873 the Board of Trade inspected the full length of the new line throughout from Greens Norton to Stratford. describes all of the stations, including "those previously open at Fenny Compton and Kineton" - but very strangely no mention of either North End or Warwick Road

A press report of this opening is also very interesting- the newspaper comments that "the previous short section of railway has been very accommodating.....each train carried its own booking office...simplicity of arrangement....trains stopped for passengers when they appeared" and adding that it was hoped that the full opening would not change this.

The report does however mention that " pick up platforms are to be introduced" which would be useful for picnic parties etc. However it does not state where.

Then an apparent last mention-

I have also looked at the monthly timetables in the Leamington Spa papers over the period-there is never any mention of either North End or Warwick Road stations.

Warwick Road is never mentioned in the local press.

So -what can we deduce from all of this?

It is strange that both of the Board of Trade inspections do not mention either station, even though their existence is otherwise confirmed by the newspaper items.

Were they just goods sidings where passengers could alight unofficially?

Were there in fact two stations anyway, or just one that was known by a different name at various times?

Riley and Simpson, in their book on the SMJ, do suggest that they were one and the same place. They say that Warwick Road/Burton Dassett opened, with the line, in 1871 and closed in 1873 (this matches Quick's info) but that North End siding then opened in the same place in March 1885(obviously in existence much earlier)

Food for thought - does anyone further information, or access to early 25" Ordnance Survey maps of the area around the 1870's that might help ?

Interestingly in the opening chapter of Eric Tonks book on the Edge Hill Light Railway he describes how the extracted ore  from  the Burton Dasset Quarry was conveyed to Burton Dasset Goods Station.

Permalink Reply by Simon Dunkley on October 22, 2014 at 11:38
Difficult one. Even if an OS survey was undertaken about that time, it may not have got the railway features quite right - look at pre-1900 maps of Towcest, for example, which show facing access to the engine shed from the Banbury line, via a diamond crossing over the Blisworth line, rather than a trailing access from the latter which is more likely, and indeed seems to be the only option backed up photographically (though crucially, never 100% clearly for the era).

What to make of all this, though? We may never be totally sure, but it seems likely that Warwick Road (under whatever name) was nothing more than what we would call a halt nowadays, which happened to be adjacent to Burton Dassett sidings. These latter were operated by a ground frame (presumably released via a key on the train staff) and the location was not a block post, and had no signalling connected with such operations. I am surprised that the BoT inspection doesn't mention it, even in passing, but otherwise it does sound as if it was downgraded to an unofficial request stop, if not that from the very start. Certainly the existence of the platform suggests something which may have originally been intended to be a "proper" facility, even if only a halt. It also suggests (to me, at least) that this is one and the same place.

Although placed at a major road, the station is in the middle of nowhere as far as potential regular passenger traffic is concerned. I can well imagine the somewhat optimistic proprietors of the EWJR erecting a short platform in the vain hope of attracting a little more traffic, and advertising it in the press to drum up interest, but not telling the BoT as (a) it was not sanctioned in the Act of Parliament which authorised the line and (b) to avoid any costs of closing it down if it didn't work out as planned.

Hope that helps - all supposition and opinion, I am afraid, but with (I hope) a degree of logic behind it.

Most interesting, Barry. I make reference to the book - Register of Closed Passenger Stations & Goods Depots in England, Scotland & Wales, by C.R. CLINKER.

No mention is made of goods closure for any of these stations.

The section from Fenny Compton to Kineton had only been opened since 1st June 1871, with the sections both sides following from 1st July 1873.

Old map of 1886 showing, I believe, the old station perimeter to the south of the line, next to the Warwick to Banbury road. 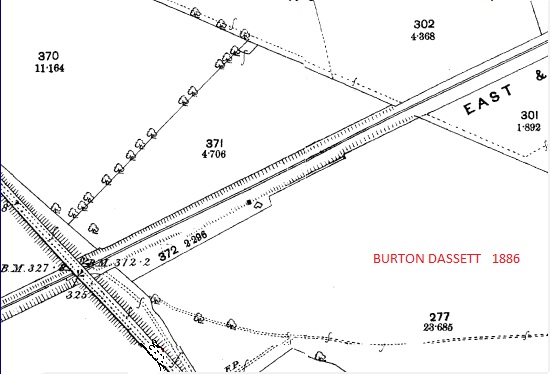 Old map dated 1905 of Burton Dassett / North End area, showing sidings and station complex with an aerial tramway marked. This contradicts Clinker, as he states that the station was not open until 1909, under the SMJR. 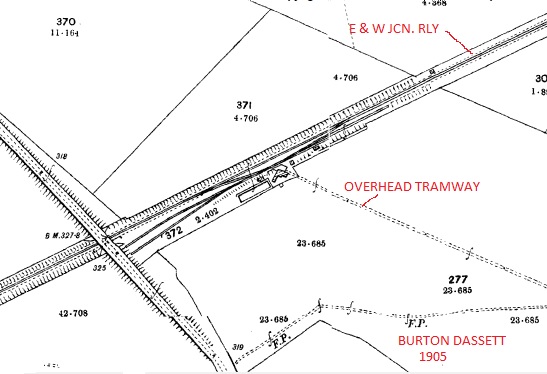 Reference is made to the SMJ'S Burton Dassett platform on the Banbury to Warwick road (B4100), as never being recorded in public timetables. An article on the EHLR states that this railway started from a yard, that had been previously used for other ironstone workings, adjacent to this platform.

Thanks for the responses so far- I'll hang on a while in case there are any other contributions before rounding up the "evidence" and commenting further.

Meanwhile, just to toss another thought into the discussion- the attached image is from the OS 6" map of Warwickshire circa 1885 survey (apologies for the rather poor image)

It shows the area immediately to the north of North End village-the road running off the bottom goes directly into the village.

But note that strange footpath that just stops dead at the railway-why?  Could this just be the access to the old North End station site?

Any thoughts- or references to any larger scale maps out there?

Could this be the platform at North End ? 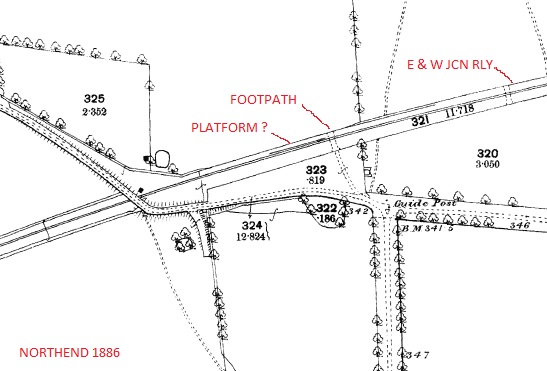 Have we forgotten about the Bridge Numbers index ?

This puts Warwick Road station 61 chains on from North End station, (travelling West). Looking at the maps this approximates to 0.75 miles between the two stations, which by my estimate puts North End station in the vicinity of the platform? / footpath in the above map.

There would seem to be a conflict of facts relating to Warwick Road station.

1/  The station was situated on the western side of the Warwick to Banbury road (Bridge 66). Warwickshirerailways.com. (By implication from /2.)

2/ The Bridge Numbers index puts the station 1 chain before Bridge 66, on the EASTERN side. Burton Dassett platform is exactly the same distance as Warwick Road station.

Burton Dassett platform is confirmed as opening, under the SMJR, on 1st Dec 1909, both by Clinker, Warwickshirerailways.com and J.M.DUNN. 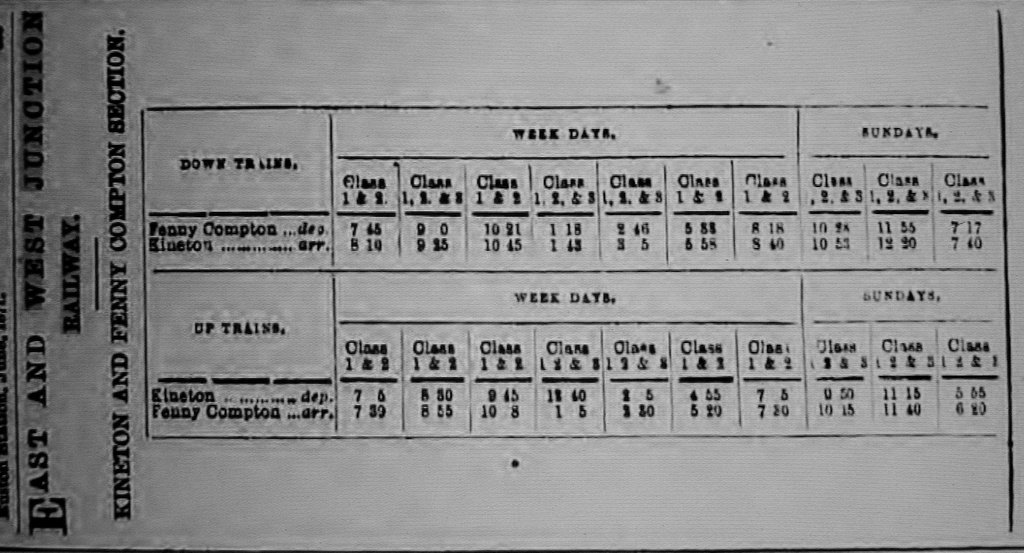 Agreed- the Warwick Road location is ambiguous. I've seen it referred to on both sides of the bridge at various times

On the 1886 map the markings by the line at North End could well be either a platform or a siding, but there is nothing similar at Warwick Road at that date-maybe the development of the sidings wiped out the earliest traces?

Although the Bridge Number Index is a marvellous resource, and very useful, I do think it can be a bit misleading on early historical info, and probably just repeats other published data. Presumably it dates from post 1960 (there is no Broom line on it) and was then added to from other sources?

Off on another tack- has anyone seen the actual entries for North End / Warwick Road in Bradshaw's timetables? I wonder if it shows them in the actual timings list, or -like Tiffield- just mentions something like "trains stop by signal"?

Apparently these Bradshaws are in the National Archives at Kew and I'll have a look next time I'm there-looks like both stations were in it from Aug 1872 through to June 1873, so it will interesting to see.

My thinking is that these two stations were the "pick up platforms" mentioned in the local press in 1873, although the report mentions them as "to be introduced" and they were obviously there prior to that date according to Bradshaw.

If anyone wants to have a look, the maps can be found at maps.warwickshire.gov.uk/historical

More thoughts welcome- we're getting there!