Please find attached a copy of the OS 6" map 1888 - 1913 series that illustrates the subject cable-way (called a tramway on the map) and also the Burton Dassett sidings. This cable-way is mentioned by Arthur Jordan in hos book on the SMJ at pp45, he does discuss the question of man-riding! I understand but have no details that there was a fatal accident at Northend involving the cable-way (man-riding?). Eric Tonks included an excellent chapter on this topic in his book, ‘Ironstone Quarries of the Midlands, Part 2, The Oxfordshire Field’.

The Burton Hill Iron Ore Co appear to have been renting railway wagons from as early as January 1871, which would suggest that the aerial ropeway was in active use (on and off) from the moment the EWJR was opened for commercial operation. Although the exact closure date is not certain, the last recorded use seems to be 1925. I say ‘on and off’ because the quarries at Burton Dassett were not in constant use throughout this period, and the ropeway fell into a fairly bad state of disrepair.

I’ve attached an image of the ‘cage’ that protected the public from falling debris where the ropeway crossed the road at North End. Tonks refers to the practice of taking a ride in the buckets, but I don’t recall him referring to a fatality, so I’d be really grateful if you could point me in the direction of your source for that information. I wonder if the fatality occurred before or after the cage/bridge was constructed. 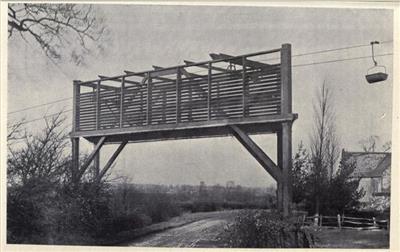