Again not strictly SMJ but very close to it!

Browsing through the internet recently I came across the photograph below of the two Army Fire Department fire engine rail-cars that were posted to CAD (as it was then) Kineton in the mid sixties when the new fire station there was built. The station rail siding running into it where these rail appliances stood, I believe in their own bay, next to the conventional road appliances.

The photograph displays the machines standing in a scrapyard awaiting their demise in the early seventies. Mention was made that they were built in the mid fifties, if that is the case then they must have either been held in store or utilized somewhere else as they did not arrive at Kineton until somewhen between early 1964 and late 1966.

I apologize to the person who originally took this photograph but I do not have his/ her details to give credits.

A recent drive down the Kineton to Edgehill road indicated that the track was very rusty and a new crossroads for road traffic with level crossing type flashing signals has been installed. I have heard from elsewhere that all rail movement of ammunition has been banned. Does this mean therefore that the sole remaining stub of the SMJ from Fenny Compton to Burton Dassett has now gone out of regular use?

PS: Was the bridge at Fenny Compton on this stub ever repaired after the lorry strike a couple of years ago? 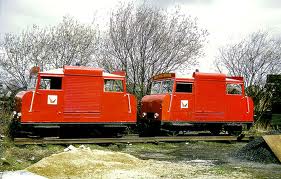 Permalink Reply by Gary on July 8, 2013 at 13:25
Dave,
Interesting pic and info.
The bridge was repaired but the demolished span was not replaced. There are pictures on here post incident