When Foinavon won the Grand National back in 1967 at 100-1 my dad’s cousin, a ex-Woodford driver in the passenger links, had backed it at an earlier price of 500-1 simply because he had drawn it in a lottery and also knew the jockey, local man Johnnie Buckingham.  ‘ If all the other b*gg**s fall down it will win, and I shall win £25 for my bob stake!’, he had forecast and that’s exactly what happened! 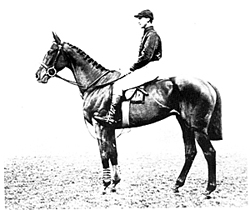 But my gran, an avid racefan, was not that impressed with Foinavon’s amazing victory. ‘That’s nothing compared with what Rubio did in 1908. He used to pull the horse bus from Towcester Station into town, was entered in the National, won it fair and square by a good distance too.’ Well Rubio’s story wasn’t quite as simple as Gran had told it but it’s a fascinating story none the less. One of the faith of a man who against all the odds put his trust in a remarkable horse that nobody else had much time for.

Rubio was bred at Sacramento, USA in 1898 by J B Haggins, who had made his fortune in the California Gold Rush then set up the world’s largest stud farm.  He sent the horse to the UK to be sold at The Newmarket Sales the following year, but no one was interested in this well bred American horse which was snapped up for just 15 guineas by a Northants horse dealer, Septimus Clarke.  He in turn sold it on as a foxhunting horse to Major Frank Douglas Pennant for 95 guineas!  The Major, who was also a steward at Towcester racecourse, was impressed with Rubio’s stamina when out with the hunt and was convinced that someone could turn him into a successful racehorse.  He tried to sell Rubio for such purpose but after it failed to reach its 60 guineas reserve he decided to have it trained for himself.  He employed Brian Bletsoe to do this and it won three minor chases in 1903. But then... disaster ... it broke down with a very serious problem with its legs and feet and the Major’s vet ordered it to be retired.

But Major Frank still believed that Rubio could recover and came up with what seemed like a crazy cure and fitness regime for the gelding.  He believed that really hard road work would heal and strengthen Rubio’s legs and feet .  Rubio was hired by the Pomfret Arms Hotel (nowadays the Saracen's Head and a former stage coaching inn) to haul its horse bus from Towcester Station to the said hostelry.  At the time my gran had been working as a barmaid for the Greyhound at Blakesley and was regularly sent to Towcester on the E&WJR train to purchase small portable consignments of expensive wine and spirits when the pub ran short. She had regularly seen the horse pulling its bus along the Watling Street from the E&WJR station and may well have ridden on the bus. She was certainly feisty enough to have asked her employer for the bus fare.  She was definitely fond of the handsome chestnut gelding as were many of the other passengers who fussed over it when disembarked from their trains at Towcester.

After about three years shuttling up to 30 miles a day along Watling Street Rubio went back into full race training with top trainer Fred Witherington.  Despite winning at Towcester while carrying 12 stone and coming 3rd in a very promising outing in the Grand Sefton Chase at Aintree, 1907 ended with a distinct lack of interest in the horse.  Another trainer W Costello took up training Rubio for Major Frank.  It was decided to give Rubio a try out in the 1908 Grand National. Top jockeys E Piggott, the father of Lester, and W Bissell both turned down the chance to ride Rubio, so former trainer’s son Harry Bletsoe took the invitation to ride him. 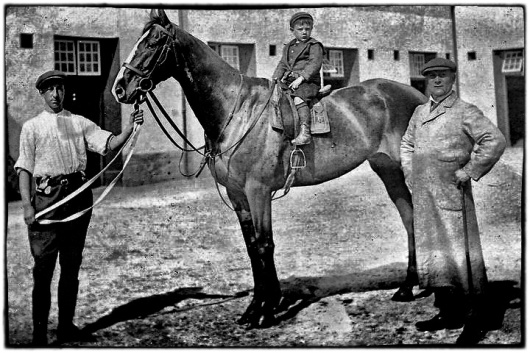 Picture by kind permission of SMJ website member Ian Costello, William Costello's great great grandson. William is standing on the right and his son, Ian's grandfather is seated on Rubio at Danebury Manor.

Both Major Frank and trainer Costello were content for Rubio to run an easy race and simply finish the gruelling course on his maiden visit. Jockey Harry held a sensible inside line keeping his mount out of trouble.  1908 was a particularly tough National and only seven horses survived the first circuit, Rubio had survived a scare at the water jump when it took off too early. Harry finding his mount running 4th, sensed that Rubio still had plenty of running left and opened up looking for a placing.  But what happened next shocked everyone apart from Major Frank who always kept faith in the horse, as Rubio reeled in the three front runners and stormed to a ten length victory. The first for an American horse. And Major Frank had profited from a small wager on Rubio.

Rubio ran at Aintree again the following year but now aged 11years and probably past his best fell, he was never to have any more race successes. Rubio was buried at Sholebrook Lodge, Whittlebury, Northants.

Major Frank Douglas Pennant lived to be 101.  There's a railway link with Major Frank himself as his family owned many of the North Wales slate quarries and narrow gauge lines that served them. They were the Douglas- Pennants who built Penrhyn Castle, where there is nowadays an excellent collection of narrow gauge locos and artefacts, including the stunning 'Fire Queen'. Several surviving Hunslet slate locos are named after Major Frank's relations including 'George Sholto', 'Edward Sholto' and 'Hugh Napier'. All three were Douglas-Pennants and the carried names refer to their Christian names.  Major Frank himself inherited the title Baron Penrhyn late in life when a distant cousin failed to leave a heir.

And did my gran chance a bet on Rubio? Who knows? ‘Never bet on the National’, was her reply to my question,’it’s just too much of a lottery just look at what happened with Foinavon.’ Sound advice that I'm sure she never heeded herself! 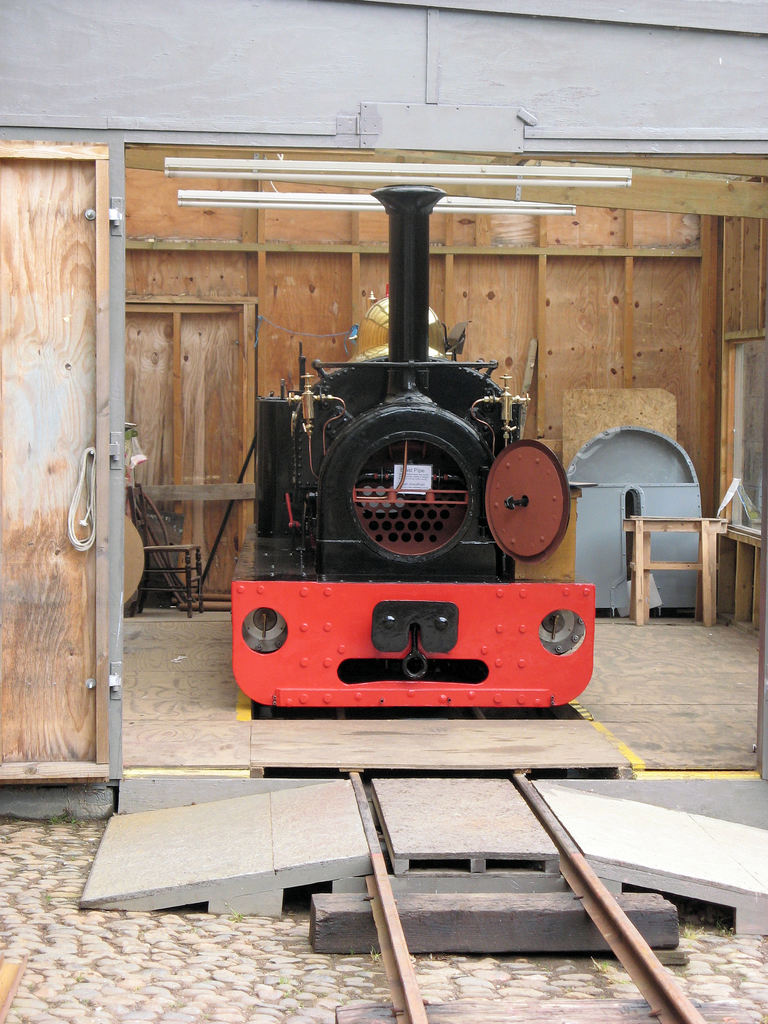