Permalink Reply by Simon Dunkley on November 14, 2014 at 22:20
The "crest" that Andy uses was taken from a scan of the crest on the cover of the first edition of the Oakwood Press book (which I suspect really is nothing more than a photo from the seal die), which was scanned in about 1997/8. At the time, scanners were fairly uncommon, and they were bulky, too. I didn't have one, but popped round to a friend who did, and we then had the joy of removing the orange background, pixel by pixel. I was one of the first visitors to the original site, and happily emailed the image to Andy.

As a fairly low resolution scan of a small image, the result is somewhat pixelated. It might be worth producing a new one at some point: the shading patterns may indicate colour coding, in heraldic circles, as Jim Goodman's scans show. Maybe we could have a colour version?

Simon, the seal die is a METAL stamp that was used in a seal press machine to stamp official company letters. It does not impart any colour to the paper, I suppose it's similar to embossing. The crest or coat of arms is a colour shield that most big railway companies had and displayed them on their engines or carriages. The coat of arms are usually slightly different to the seal die pattern. I have not yet been able to find a coat of arms for the SMJR in colour or black & white.

I know the difference between a seal die (is a larger one a walrus die?) and a crest.

If you look at the seal image, there are different hatching patterns, and I believe these are used to represent colour.

It may be that this is as far as it ever went: I have seen no evidence of a crest on a locomotive, carriage or wagon. Use of lettering seems to have been it, after a short period of SMJ plates on engines.

My point was, that if we wish to create a colour version, then we probably use the hatching, or indeed the Stratford seal, as guidance. It might not be 100% historically correct, but it would be authentic in spirit. (I was thinking more of the "society" than I was or your Heldon project, admittedly.)

Seal die for the Birmingham, North Warwickshire & Stratford upon Avon Railway Company showing that the emblem for Stratford was indeed a shield with 3 'tiger' faces and inverted 'V'. C 1894. Interestingly Sir Edward Watkin, of the G.C.R., hoped to gain control of this railway and together with the SMJR provide a through Great Central route from London to Birmingham. 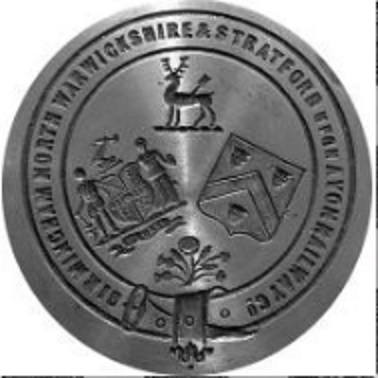 The EWJR had an emblem used on their coaches. Got it stored on my computer (on tablet at moment) so will dig it out. Whether it is a "crest" or not I don't know - there are some rules about crests, heralds and emblems, I believe.

Over 11 years ago I came across a book with details of old liveries, devices, etc. The SMJR managed less than a page, including a very brief history of 3 sentences! I passed the book on to a friend who runs a decal manufacturing business not unknown to railway modellers. It may have been George Dow's book, if so then he would have had direct access to any remaining official records.

The attached picture is a scan from that book, and the following words accompanied it:

"No armorial device of any kind was in use but the oldest and biggest component, the East & West Junction, which ran from Stratford-on-Avon to Towcester, displayed a garter 12 ¾ in wide x 12 ¼ in high on some of its chocolate and cream coaches. It is illustrated because of its great rarity; the vehicle number was usually exhibited within it.

"According to Teariness' records this garter was first ordered in 1897, when the white background was shaded pink. Similar transfers ordered nine years later embodied a green background shaded pink. The specimen in the author's collection has a pale blue background."

I would advise being slightly wary of the "chocolate and cream" description, as contemporaneous descriptions also suggest that the darker colour was crimson lake, or like the LNWR's plum. In reality, there was probably some form of lake involved, but beyond that, who knows? 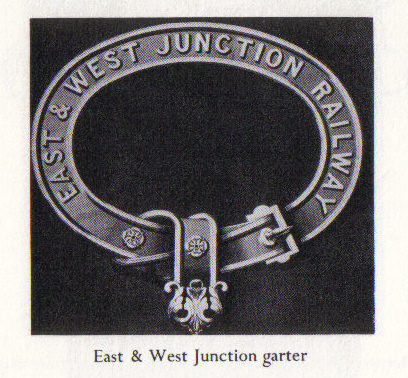 Andy, the official blazon for Stratford upon Avon was, in 1905, ' a chevron azure (sky blue) between three leopard's faces gules (dark red). It doesn't mention the background colour, but the blazon is yellow or gold. Whether the SMJR used a coat of arms is still elusive, the possible other option is to have the 2 seal dies side by side for Helmdon.

Thanks for the info on the East and West 'garter' displayed on its coaches. You can see an example of this  on page 150 of the Riley and Simpson book. I always wondered what that blob was in the middle of the 'garter', and now I know it's the coach number (looks like no.6 to me). Interesting to note that the lettering on the coach is SMJ, I wonder if they changed the E&W lettering on the garter?

Of course, that obsessive part to us might be exactly why he came here and started the thread! :)

Simon, who has just realised (obsessively!) that he has half of SMJR in his forename!

Thanks for that: I was completely unaware of that envelope.

BR had a collection of such items, I believe more than one copy of each was made. I saw one incomplete set on the walls of a corrido in a hotel. EWJR was conspicuous by its absence, however.

But that scan there may provide us with an example for colour matching the red/chocolate/purple colour used on the coaches. Bit difficult for me to do, as I have a mild red-green colour blindness, but there is probably some way of doing it on a computer!