Would the GCR have gone via Towcester?

Looking through Mac Hawkins book on the GCR then and now, he mentions that the GCR were thinking of running a line connecting Brackley to Northampton and had provisionally made a mound ready for a platform to be later constructed but they dropped the idea.
This got me wondering what route they would have taken and whether they would have followed a course similar to the A43, crossing the SMJ for a second time near Towcester, or whether they would run a spur of off their mainline between Brackley and Helmdon, and link up with the SMJ?
Any thoughts or knowledge on this?

It's always interesting to get a new, and different, view on an old subject. The only point I'd like to make is the unusually large gap between the buildings and the platforms, as seen in this photo by HC Casserley. There certainly looks enough room to get another line and platform in:- 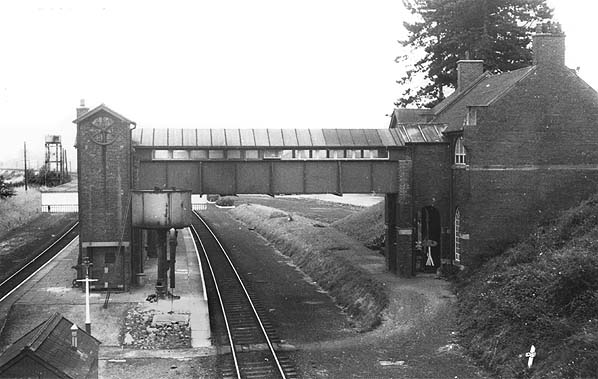 I totally agree that there was plenty of room for an extra track, not only on the down side as you point out but also on the up side, which was built as a siding on which the redundant Starlight Special coaches were stored in the early sixties.

In fact, it looks to me as if the GCR made provision for through of by-pass lines in both directions, so that --- if traffic levels increased --- expresses could rush through Brackley uninhibited by the 'turnback' trains that terminated at Brackley. From an operational perspective, this all made perfect sense.

On the other hand, if the GCR had even the slightest intention to make Brackley a junction station, it would have made provision for a means for passengers to reach this notional extra platform. As things were, there was not any room to spare at upper level to create a landing for an additional staircase. The circulating area was quite modest, with the booking office and the SM's office on your right and the lockup 'cage' for parcels and bicycles on the left. Straight ahead was the footbridge.

To create a 'Northampton platform' would have involved major reconstruction to the station building, whilst at track level the GCR would have had to make vast excavations for the diverging tracks to Northampton in the cutting north of the station.

And to what avail? Northampton was already served by two LNW stations and one Midland Railway, providing a direct service to London with frequent trains. The GCR could not realistically hope to tap off any of this traffic along a longer, roundabout route to London via Brackley, involving a change of trains and a wait at a station that had neither a refreshment room or a bookstall. Local traffic between Brackley and Northampton would not be great; most locals looked to Buckingham and Banbury for doing shopping that Brackley shops could not handle (the bottom station in Brackley offered a direct service to those two towns).

By and large, the GCR was interested in the bigger and more lucrative picture of' long-distance  passenger and freight traffic in the 1890/1900 era. Why would be interested in a tuppenny-hapenny feeder service from Northampton, especially one constructed through quite heavy terrain?

I am not trying to be a contrarian or trying to stop discussion of might-have-beens. But I feel I must emphasize that the Northampton platform story is a myth (the Wikipedia article https://en.wikipedia.org/wiki/Brackley_Central_railway_station  also points out that the so-called platform t it appears to be located on the "wrong side" of the station, since Northampton-bound trains would have had to cross the main running lines in order to access the branch). It was just a schoolboy joke made to impress his friends!

It's always interesting to get a new, and different, view on an old subject. The only point I'd like to make is the unusually large gap between the buildings and the platforms, as seen in this photo by HC Casserley. There certainly looks enough room to get another line and platform in:-