I have recently been transcribing the 1949 Freight Working Time Table for the SM&JR route  from copies taken of the volume in the National Archives into a spreadsheet, with the intent of merging this with the Passenger WTT for the same period so as to get a full picture of regular movements on the line in that period.

Several of the time tabled movements refer to a motor trolley, running as follows.

These, to my mind, raise a number of questions.

I've found te section on motor trolleys in Dick Bodilly's 'Last Year of the SMJ pickups' on this website...

Under "Breakdown's and inspections" it says...

"PW staff were still using a hand propelled trolley to travel to locations along the line in the early 50’s. Much earlier in SMJ and LMS days my grandfather used a bicycle type device, probably the one pictured in Jordan’s book.  A small petrol engine trolley took the place of the old ‘handpump’. It was stored at either Towcester or Byfield. Proper inspection trains were much less frequently seen and a variety of locos appeared on them ranging from Fowler 2Ps to modern BR Standard types."

Does this mean that these trolley workings (or possible their returns) were being used for PW inspections?

In the WTT they do not appear to have timetabled return workings. Does this mean that they travelled out as a timed path, but worked back inspecting the line in clear paths  as required?

As there are both an up and a down path from each of Byfield and Kineton, was it a case of 'either /or'? i.e. a single vehicle at each location, providing the up or the down or neither service as required.

Finally, was one vehicle stored at Kineton at this period, rather than Towcester?

During the war if not later there were still 'linesmen' daily walking sections. I recall regularly seeing the little motorised trolley passing Blakesley in the 50s. Often it had two or more PW men aboard. I got the impression that they were being taken to whereabouts they were working but could have been wrong. I never actually saw a loco hauled inspection train myself but other people did. 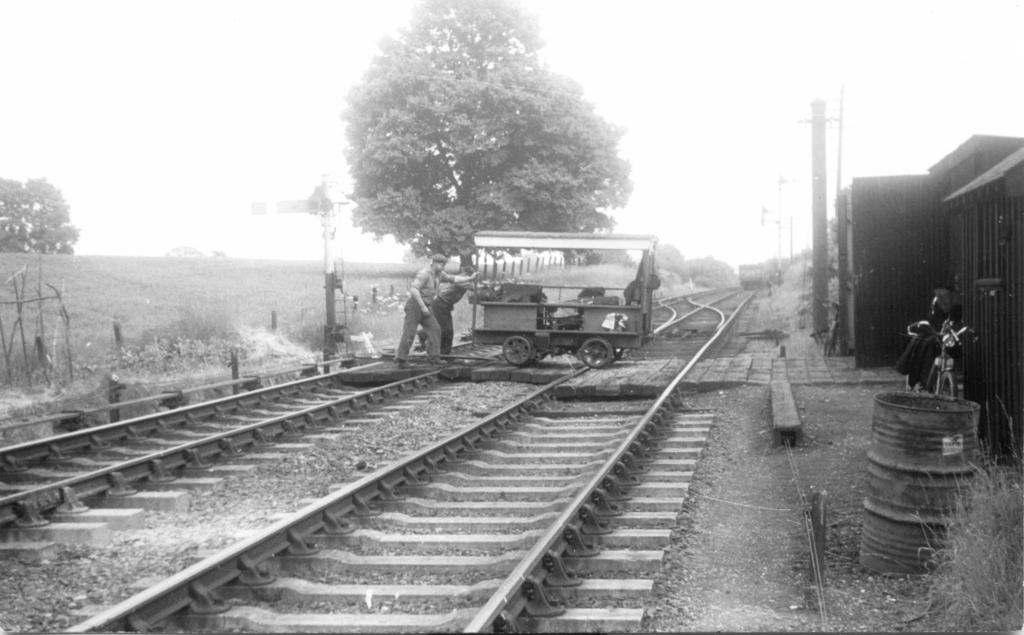 This photograph of a motorised trolley being man-handled to / from its home in the hut alongside the line was taken by H C Casserley at Byfield in June 1958, and so fits in with the 1949 WTT info.

I'm sure that earlier, and less substantial, trolleys could just be lifted on and off the line anywhere as required to allow trains to pass, but presumably these motorised versions would have been too heavy for that, so must have been parked up in sidings when the line needed to be cleared?

I seem to recall reading somewhere that the LMS introduced these motorised trolleys onto the SMJ in the 1930s, so Dick's mention of hand propelled versions still being used in the 1950s is interesting - perhaps they were used on shorter distance jobs?

Altogther an interesting subject  - I'd never considered them being included in WTT's at all !

There was a hut for a similar trolley at the Woodford Junction too. It is visible in contemporary photos and we found some evidence for the sleeper "road" too on our "Tour" (Was that really 5 years ago now??)

Regarding the hut, a diagram I have seen has a building marked as a P Way Garage close to the track. I suspect this is the motor trolley hut, although one photograph appears to show a hut on the opposite side of the track from that shown in the diagam.